How many Senate Republicans are going to rebel against Trump's border emergency? 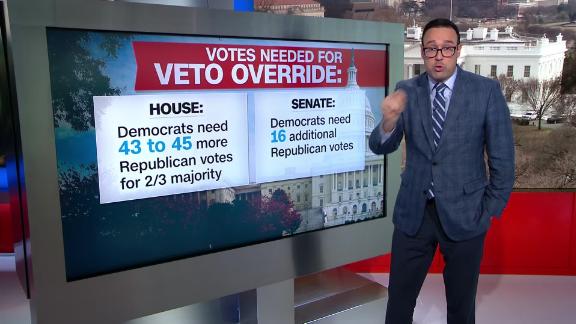 CNN's Chris Cillizza breaks down which GOP Senators are expected to vote against President Trump's national emergency declaration, and how many votes the Senate would need to overturn an eventual presidential veto.

The cake appears baked on the privileged resolution of disapproval about President Donald Trump's use of a national emergency declaration to secure the money he wants to build a border wall on the southern border.

"I think there will be 10 Republican 'no' votes. Possibly more," Kentucky Sen. Rand Paul said Monday. "If (you) look at the history of not only our government, but other governments around the world, governments that begin to be run by emergencies, really bad things can happen."

Ten GOP votes for the resolution -- and against Trump's use of national emergency provisions to fund it -- would be a major rebellion against the President, the likes of which we haven't really seen so far in Trump's tenure. (There are four official "yes" votes among Republicans as of Tuesday: Paul, Maine Sen. Susan Collins, Alaska Sen. Lisa Murkowski and North Carolina Sen. Thom Tillis.)

That rebellion is all the more remarkable when you consider that a Senate vote in favor of the disapproval resolution is entirely symbolic. Assuming the measure passes the Senate, it will go to Trump's desk, and he has already made clear many times that he plans to veto it. Once that happens, it will be kicked back to Congress, which would need two-thirds majorities in both chambers to overturn the veto. And the votes for a veto override just aren't there.

If you are a Senate Republican voting for this resolution, then, you know you are doing so without any realistic chance that Trump won't get what he wants anyway. And Trump hasn't exactly been shy about his desire for Senate Republicans to stand strong against the resolution.

"I hope our great Republican Senators don't get led down the path of weak and ineffective Border Security," Trump tweeted last month. "Without strong Borders, we don't have a Country - and the voters are on board with us. Be strong and smart, don't fall into the Democrats 'trap' of Open Borders and Crime!"

Then at his two-plus-hour speech at CPAC over the weekend, he exhorted GOP senators to stick with him. Said Trump:

"There's a lot of spirit in the House, and I think in the Senate too, but we're going to have to see because we have a vote coming up.

"And a lot of people talk about precedent. Precedent. That if we do this, the Democrats will use national emergency powers for something that we don't want. They're going to do that anyway, folks. The best way to stop that is to make sure that I win the election. That's the best way to stop that. They're going to do it anyway. They'll do it anyway."

It appears as though Trump's pressure campaign has already failed, however. With the four current Republicans on record as supportive of the resolution of disapproval, it will pass, assuming that all 47 Democrats (and independents who caucus with Democrats) vote for it.

Where might the other six (or more) votes for the proposal come from Senate Republicans? Here's a quick look at the likeliest suspects:

* Cory Gardner (Colorado): Gardner is up for re-election in 2020 in a state Trump lost in 2016 and that moved even further from Republicans in the 2018 midterms. He hasn't said how he will vote yet, but did say last month that "Congress is most appropriately situated to fund border security."

* Martha McSally (Arizona): Like Gardner, McSally wll be a major Democratic target in 2020 after she was appointed to the Senate seat in late 2018. Late last month, she tweeted this about the resolution: "Spoke with @VPOTUS today on the national emergency declaration -- I am seeking assurances that the money will not come from Arizona military construction projects. We can & must secure our border while ensuring our armed forces have the resources and facilities they need." That makes me think she is trying to get to a "no" vote on the resolution by being able to tell constituents she got assurances from the administration that the military money Trump is borrowing wouldn't come from Arizona's piece of the pie.

* Joni Ernst (Iowa): Ernst has stayed almost totally silent about the resolution -- not surprising given that a) she is up for a second term in 2020 and b) Iowa moved strongly away from Trump in the 2018 midterms.

* Mitt Romney (Utah): The 2012 Republican presidential nominee has said he has made up his mind on how to vote on the resolution but isn't sharing it just yet. His public comments suggest Romney will vote for the resolution of disapproval: "The emergency course is not one I favor," Romney said recently.

* Lamar Alexander (Tennessee): Alexander isn't running for another term in 2020, which means he doesn't have to worry about the political impact of a "yes" vote on the resolution the way some of his GOP colleagues do. And he has been outspoken in urging Trump to reconsider using emergency powers for the wall money.

* Mike Lee (Utah): Lee's emphasis on his constitutional conservatism make his a hard vote for him -- given that the Constitution makes clear that the legislative branch, not the executive, appropriates the money that the federal government spends. "Congress has been ceding far too much power to the executive branch for decades," said Lee recently. "We should use this moment as an opportunity to start taking that power back."

Remember this: Republicans control 53 seats in the Senate. If 10 (or more) vote with Democrats on this resolution, that will mean 20% of the Senate GOP conference will have bucked the President on something that has almost zero practical chance of working.

In this Washington world of reflexive partisanship, that's something worth noting.

Walmart closed in several locations throughout the area

Potential exposures for May 31