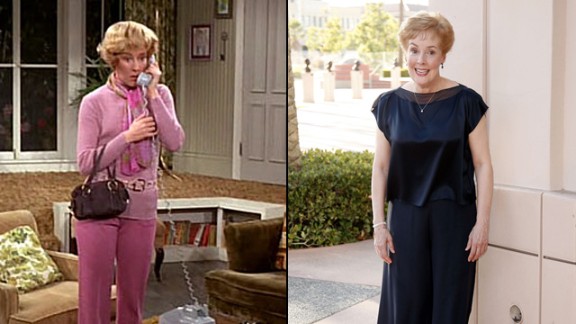 Georgia Engel, who was nominated for Emmy awards in "The Mary Tyler Moore Show" and "Everybody Loves Raymond" has died. She was 70 years old.

As Georgette Franklin Baxter in "The Mary Tyler Moore show," the actress Georgia Engel, who died Friday, was pretty and people-pleasing — a pioneer of the modern-day, nonthreatening female sidekick archetype, the sort of character everyone loved to love. But viewers would soon learn to take her seriously.

With her baby face and baby voice and more-often-than-not daft responses, she was — at least at first glance -- the perfect contradiction to Mary Tyler Moore's pragmatic, '70s career gal Mary Richards. In reality, Georgette was an early example of TV looking to change the perception of the standard female character.

Indeed even as Engel's character played the role of the "dumb one," hewing to certain expected gender roles (a step back for female characters at the time, perhaps), Georgette helped upend some stereotypes.

It may have often looked as if she were the butt of jokes, but Georgette regularly used comedy to her advantage, holding her good-natured ground to get what she wanted. Watch the snip of "A Fat Lady and a Duck," in which she innocently plays to her friend Mary's good side, attempting to cheer her while swiftly stealing the scene out from under her.

That Georgette was married to a pompous blowhard anchorman was also significant, of course. Every act of arrogance from the self-promoting Ted Baxter became even more off-putting next to his kindhearted wife, who, by the way, stood up to him more often than not — and sometimes she wasn't so sweet-natured about it. There's nothing like a good woman to make a bad man look worse.

After "Mary Tyler Moore," Engel got more mileage from her mild-mannered persona. From 2003 to 2005, she had a recurring role on "Everybody Loves Raymond" that played to some of her MTM show strengths. On "Raymond," her character, Pat MacDougall, was known for being timid but sweet, her favorite expression, "Oh, my!" And yet she was not entirely innocent: Hers was one of the few characters on the show, for example, with a history of smoking. Engle earned Emmy nominations for all three seasons in which she appeared.

Her sort of demure, innocent-but-is-she-really? comedy paved the way for establishing more complex sidekick roles for women but also for more complex roles for women in comedy in general. Truth-telling smarts, camouflaged as airheadedness, became a TV character craft to be perfected, and proudly; what you saw, and heard, was not always what you got.

Betty White arguably modeled some of Georgette's subversive not-so-dumb-girl act in her role as Rose on "Golden Girls;" Amy Schumer has made a whole career with a variation on this theme: humor that is once self-deprecating but empowered. "Office" breakout star Ellie Kemper, who played the batty secretary at Dunder Mifflin and went on to star in her own series, "Unbreakable Kimmy Schmidt" (two Emmy nominations) got early attention for a one-woman show she performed through the prestigious Upright Citizens Brigade Theater called "Dumb Girls."

They may not be directly imitating Engel, but they are certainly channeling the TV "type" that she was a virtuoso at portraying. Fun fact? Even if the characters Engel crafted were fictional, Engel's girlish voice, at least, wasn't part of the act: "What you see is what you get," said White in a 2012 interview. "That's not a character voice — that's our girl."

Time and again throughout her career, Engel — as Georgette or Pat or any other of the dozens of roles she assumed (these later included a voice-acting career) — offered lessons in learning to using what you have, and undoubtedly let everyone know that funny girls are most likely way smarter than you think they are.

Fatal crash on Route 46 in Verona; part of road closed in both directions