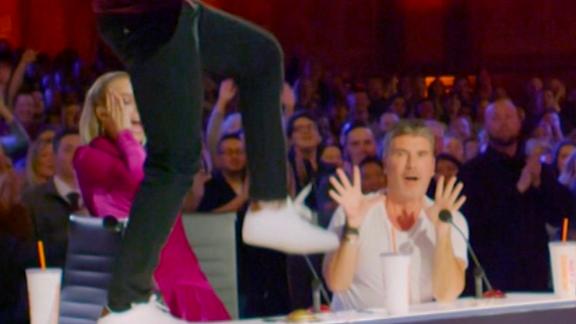 "America's Got Talent" judge Howie Mandel stepped on the golden buzzer to advance Joseph Allen after the singer said he wanted to leave his footprint on the world.

"America's Got talent" judge Howie Mandel used his foot to tap his Golden Buzzer for a singer/songwriter he called "electric" on Tuesday night.

Mandel was so moved by 21-year-old Texas native Joseph Allen, he hopped on the judges table in excitement and sent him straight to the live rounds.

Allen, who is a student in Phoenix, Arizona, told the audience he's hoping to move the world with his voice. He sang an original rap-ballad number for the crowd.

"I see myself as someone who can make a major impact in the world and I just want to see how much of a footprint I can leave on Earth before I leave," Allen said.

Following his performance, Mandel was so excited he climbed on top of the judges' table and stepped on the Golden Buzzer with his foot.

"You said you want to leave a footprint, well I'm going to give you the footprint you need," he said.

"America's Got Talent" airs Tuesdays at 8 p.m. ET on NBC.