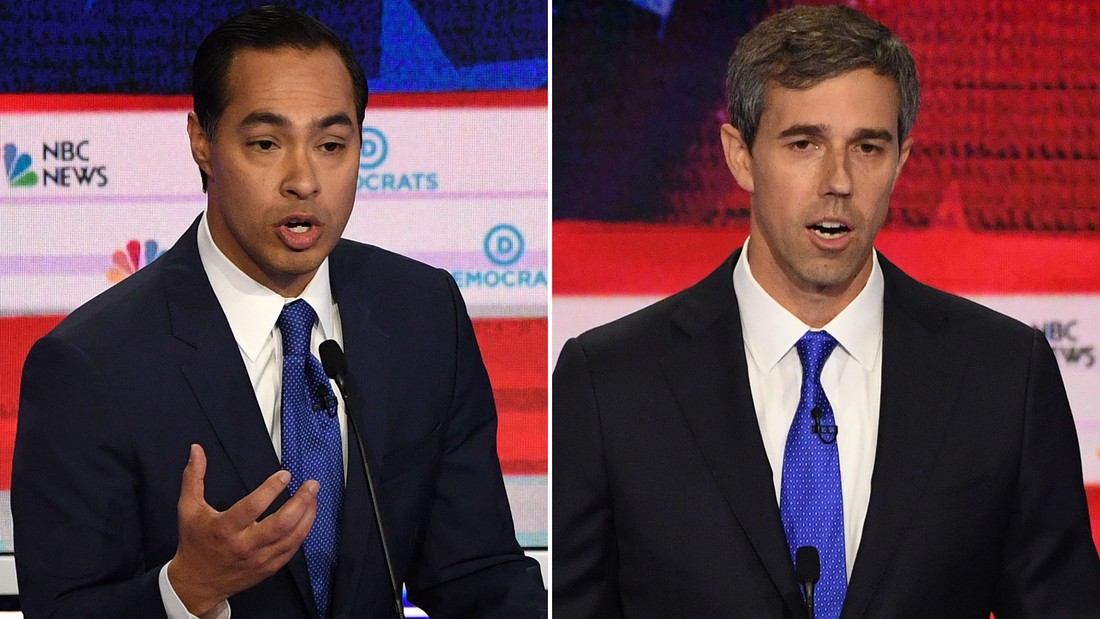 Former Housing and Urban Development Secretary Julián Castro challenged former Rep. Beto O'Rourke on how to process immigrants seeking asylum or entry at the US border.

Ask the average American what was "sticky" from the first Democratic presidential debate, and there's a good chance it had nothing to do with domestic or foreign policy. Cory Booker's meme-worthy look of astonishment as Beto O'Rourke began speaking Spanish went viral, and later MSNBC got its microphone wires crossed, which may have been the only truly unscripted moment of the evening.

As for the actual debate, 10 Democratic candidates for president lined the stage Wednesday night, but four stood out above the rest. Elizabeth Warren won. O'Rourke lost. Bill de Blasio and Julian Castro likely surprised people in a good way. Booker had a moment when he personalized his answer on gun control, but mainly, he spoke the most but said the least. The rest of the candidates often seemed like background noise.

We analyzed both the verbal and nonverbal communication skills of each candidate; it was clear that everyone had a moment to shine and a moment that left them wishing for a do-over.

Warren appeared to use her depth of knowledge to answer the questions instead of shamelessly bridging to a recitation of her past accomplishments.

Warren's high point: the authenticity and conviction with which she claimed how hard she would fight for the average American.

Her low point: smiling while listening to a question about the Parkland, Florida, school shooting.

De Blasio's height wasn't the only reason for his commanding presence on stage. The New York mayor spoke with a confidence and calm that made him seem up to the job.

De Blasio's high point: the clarity with which he called for adherence to the War Powers Act, saying that clearly we hadn't learned the lessons from Vietnam.

His low point: answering the first two questions looking straight into the camera. It seemed too sales-y.

Castro's high point: His use of Spanish was the only good one and not just because it was culturally appropriate. Castro spoke in the language of his family's heritage for a specific purpose that he explained: to show how far we've come as a country that he could do so. Booker's and O'Rourke's use of Spanish was borderline cringeworthy. Castro also teed up a good punchline seconds later when he said it was time to say "adios" to Donald Trump.

His low point: While listening to a question, Castro had a somewhat imperious look about him, with his head angled slightly up; he appeared to be judgmentally looking down his nose at the moderator.

O'Rourke's performance had more ups and downs than his Adam's apple as he appeared to listen nervously to the questions. When he abruptly and gratuitously broke into Spanish during his very first answer (can you say overeager?), Booker must not have been the only one who was astonished. Millions of viewers must have checked to see whether they had accidentally hit the SAP button on their remotes. Speaking Spanish to win over voters is nothing new. Jackie Kennedy did it several times in 1960, but as Lloyd Bentsen might have said, "Congressman. ... You're no Jackie Kennedy."

O'Rourke's high point: While answering a question about America's obligation to step in and combat episodes of genocide, the former congressman finally looked like he woke from his nationally televised slumber.

His low point: When Castro was telling O'Rourke he was wrong for not endorsing a repeal of Section 1325 of the Immigration and Nationality Act, O'Rourke nodded his head in a way that made it look like he was agreeing with the criticism. It was clear that O'Rourke came armed with stories about average people, but the stories frequently fell flat and felt unconnected to the rest of what he was saying.

But perhaps "The Biggest Loser" of the evening was the former host of "The Apprentice," who was barely mentioned by name. In fact, if Washington Gov. Jay Inslee hadn't named Trump as the biggest threat to America's national security, you could almost, for a few fleeting moments, have forgotten who sits in the Oval Office. Imagine that.

Utica man accused of sexual contact with a minor