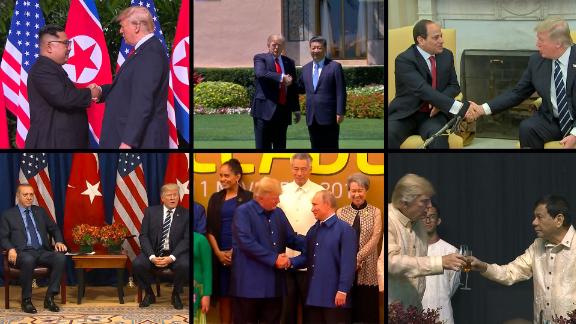 Just as Americans are getting their first full view of the Democratic candidates for president, President Donald Trump put on a startling performance on the global stage, a stark reminder of the enormity of the 2020 stakes.

Trump's trip to Asia brought the relentless torrent of appalling statements that we have come to expect, but to which we should never become accustomed. At every stop, with every tweet, he scattered petals upon tyrants, praised himself and claimed to have achieved great triumphs. Perhaps the accomplishments will come. Perhaps the praise that he so hungers for reflects the needs of other leaders with whom he identifies, and will ultimately pay off. But not yet.

Instead, the world saw the now-familiar display: criticism of allies, love for tyrants and lies. There was an added feature this time, presidential daughter and adviser Ivanka Trump, whose vaguely defined portfolio does not include top-level diplomacy, weirdly positioned, again and again, between world leaders, who could scarcely conceal their irritation. Ivanka was everywhere, prompting raised eyebrows and puzzled glances. In a video released by the French presidency, Ivanka awkwardly joins a conversation with the leaders of France, the UK, Canada and the IMF. IMF chief Christine Lagarde's eyes tell the story. Watch the video.

But it was Trump's behavior that was most disturbing. Speaking with Russian President Vladimir Putin, Trump could hardly contain his envy of Putin's mostly successful efforts to silence critical journalists. Many of Putin's critics have turned up dead. "Get rid of them," Trump said, on the first anniversary of the massacre of journalists at the Annapolis Capital Gazette.

Trump joked to Putin about Russian election interference, its assault on American democracy. (After the national uproar about his wisecrack, he claimed he addressed the issue later.)

In another dispiriting display, Trump was asked about Putin's comment that Western liberalism "has become obsolete." Putin, of course, was referring to the philosophy that embraces individual liberties, democracy, rule of law and equality. But, embarrassingly, Trump's response was about California liberals, adding for good measure that Putin has congratulated him for the magnificent job he's doing.

Trump met with Xi Jinping, the Chinese president that US officials say has imprisoned up to 3 million people in internment camps without any charges, and who runs a repressive surveillance state. Trump called him a "brilliant leader," and proceeded to make a deal that proved how brilliant Xi is. Trump agreed to freeze his threatened trade sanctions, choosing trade over national security by agreeing to reconsider banning Huawei, the telecom firm, which US and other intelligence agencies say spies for China. In exchange, Xi made some vague offer to buy more American products and help on Iran and North Korea. Xi made no firm commitments or concessions.

Throughout the trip Trump proved once again that human rights and democracy are not just a low priority for him; they are all but non-existent in his personal agenda. Other members of the administration and the US government still pursue them, but to Trump they seem more of an inconvenience.

Meeting chummily with Saudi Arabia's Crown Prince Mohammed bin Salman, he declared himself "extremely angry" about the murder of journalist Jamal Khashoggi. But then he claimed falsely that "nobody has directly pointed a finger" at Prince Mohammed. Investigations by the United Nations and reportedly the CIA both concluded the prince ordered the assassination.

Trump managed a major photo-op in North Korea, when he met the other tyrant he has professed to love, Kim Jong Un, handing another propaganda victory to the North Korean dictator. The President tweeted to the entire world about the "great honor" of becoming the first US president to step across the demilitarized zone dividing North and South Korea.

In a statement that is not only false but a reversal of the truth, Trump claimed that President Barack Obama wanted to meet Kim," was begging for a meeting." But "for some reasons [Kim and Trump] have a certain chemistry." So, Kim honored Trump by meeting him.

In fact, North Koreans had long asked to negotiate one-on-one with the US instead of with the US and regional powers. The US refused. Trump is elevating Kim, strengthening him, showering with honors the man who starves his people to finance a nuclear weapons program that secures his regime's survival. It was another triumph for the North Korean ruler. No word on how the North Korean people feel about it.

Trump's Asian extravaganza gave us the opportunity to view the 2020 choices from an international perspective. The world saw unabashed narcissism, nepotism, and moral emptiness in an administration that has so far failed to secure any major international agreements. On the other side, with the election campaign gathering momentum, stand more than 20 Democrats, with different views, different ideas and a yearning to prove to the world that the current administration is no more than an aberration in American history; that the America they used to know will return.

Calls for Malatras to resign

Crews respond to fire on Pardeeville Road in Town of Ohio

Founder of Klein's All Sports dies at 92