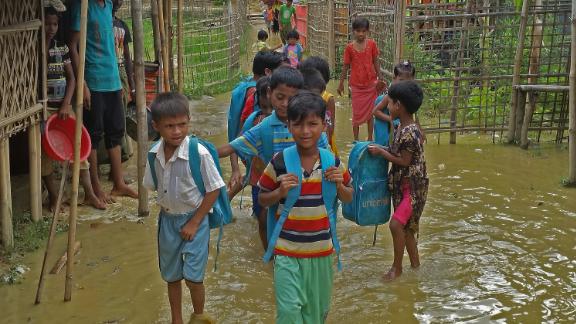 The monsoon season has arrived in Bangladesh and it is causing chaos for people living in an overcrowded refugee camp, which is home to around one million Rohingya Muslims who fled Myanmar during a military crackdown. CNN's Ivan Watson reports.

When the monsoon rains hit southeast Bangladesh this week, Hafiz Ullah and his family abandoned their flimsy bamboo-and-tarpaulin-home to take shelter in a nearby school.

While they were away, the Rohingya refugees from Myanmar lost nearly everything they owned.

"(All) our things were stolen," says Ullah's wife, Kawser. "That's why I have to live in the dark now. I lost my light and battery."

While some of the family of six's possessions did survive the rains, their most essential items -- a fridge and a cooker -- were destroyed.

"We can't cook anything because I think my stove is damaged," Hafiz says. "We don't have food to eat now, so we can't give anything to our children and they can't drink the water or go outside because of the floods."

Even before the intense flooding of the past week, their children were already sick and malnourished. "My children are suffering from fever, but we don't have any medicine," Kawser says. "We are living in real hardship here."

Hafiz and his family are among one million ethnic minority Rohingya Muslims living in the overcrowded refugee camps in Cox's Bazar -- most of whom fled nearby Myanmar during a military crackdown in 2017, which the UN says could amount to genocide. Myanmar denies those claims.

The monsoon floods in Cox's Bazar are threatening the already precarious existence of the refugees seeking shelter there.

Hundreds of makeshift homes have already collapsed after landslides occurred on the muddy hillsides around the camps. About 4,000 families have been affected, many of whom have been moved to temporary shelters.

Two young boys have drowned in the floods and several other children have been injured, UNICEF says.

Aid agencies report that around 60,000 children in the camps are unable to go to school, after hundreds of learning centers were forced to close. Access routes, medical centers and aid distribution points have also been damaged.

"It is very difficult because the paths (are) very muddy, people have a lot of trouble sometimes to reach the service points, for children to go to school," said Berta Travieso, the emergency manager for UNICEF at Cox's Bazar. "Some of the people live in very crowded conditions. This makes life quite difficult."

Aid agencies are ramping up their efforts to support the refugees and prevent the spread of water-borne illnesses.

Bangladeshi Foreign Secretary Shahidul Haque said his country was "well prepared, along with (the) UN system, to face any eventualities." He added that Prime Minister Sheikh Hasina "always takes special care of Rohingyas."

Former UN Secretary General Ban Ki-moon flew over the camps in a helicopter Wednesday with other dignitaries to assess the environmental degradation caused by the refugee camps, following a conference on climate change in the capital of Dhaka.

For now, the worst of the flooding has receded -- but another deluge is forecast in the next week and the monsoon season stretches until October.

While the rains temporarily abate, Hafiz Ullah said his priority is to repair his family's makeshift shelter so they can return home.

But the bamboo poles and tarpaulin structure, which is tied together with string, seems unequipped to deal with more heavy rain.

"We just living with crisis," he says. "We lost everything, but so what? At least we are alive."

Second shooting in one week on Neilson Street in Utica

Cuomo: New York will hold a moment of silence in memory of George Floyd