When did Barack Obama become a Republican? 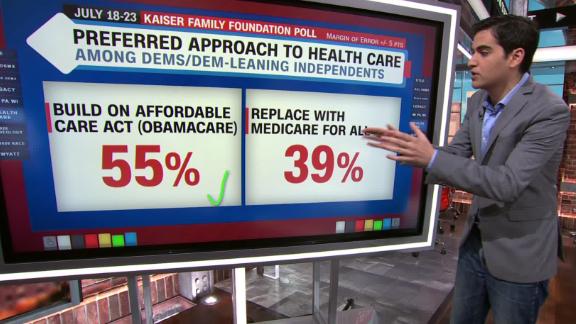 CNN's Harry Enten breaks down former President Barack Obama's popularity numbers and explains why taking aim at him is not a good idea for Democratic presidential candidates.

When did Barack Obama become a Republican?

I'm asking because, according to some folks on the debate stage in Detroit, support for policy positions like the public option, comprehensive immigration reform and trade agreements are now dismissed as "Republican talking points." The same applies to asking practical questions about how proposals would be passed or paid for. That's not only a sign of how far left Democrats are moving but also a warning about how liberals risk reinforcing Donald Trump's re-election playbook.

Of course, all this is absurd. Obama is the Democratic Party's most popular ex-President in living memory. Despite Republicans' relentless and often unhinged attacks on him as socialist and worse, it's now clear that he was a responsible center-left leader.

After inheriting the worst fiscal crisis since the Great Depression, Obama actually reduced the deficit in his second term and backed bipartisan reforms on stubborn issues like immigration. Many of his policy outreaches to Republicans were rebuffed, and it's because of the reflexive demonization of Obama that many Democrats today are saying that it's useless to reach out to Republicans. I understand their frustration. But still, the ability to work with Republicans is the third quality that a CNN poll shows Democrats want most in their next president, the first being an ability to defeat Donald Trump. And that requires more than a purely play-to-the-base strategy that ignores independent swing voters.

Let's not forget that passing Obamacare was a massive task. Obama proposed a public option as a more practical and popular alternative to the single-payer system that very few Democrats supported just a decade ago.

The fact that, in crafting Obamacare, Obama essentially adopted a Heritage Foundation proposal that was first implemented by Mitt Romney in Massachusetts did not stop Republicans from absurdly attacking it as a "government takeover of health care." And that's understandably fueled a lot of cynicism among Democrats who say they might as well now propose what they see as the real deal -- an actual government takeover of health care. Republicans' bad faith arguments have created the thing they feared.

But at a time when President Trump's Justice Department is actively arguing in court for a complete destruction of Obamacare that would leave millions without insurance, a Democratic proposal to take away people's private insurance threatens to blur some of the clear distinctions between the two parties on this core issue.

A public option is vastly more popular among Democrats and the general electorate than a play-to-the-base national health care takeover that would never pass Congress and prove staggeringly expensive to implement. Moreover, math isn't partisan: The idea that talking about the cost of a $30 trillion plan over 10 years means you're feeding into Republican talking points is nonsense.

The same logic applies to the current Democratic debate about immigration reform. It's become popular to propose decriminalizing illegal border crossings. But this only adds ballast to Trump's otherwise baseless argument that the Democrats support "open borders." There is just no way that this disincentivizes illegal border crossing. And the argument that decriminalizing illegal border crossings is the only way to stop family separations ignores the fact that current laws have been on the books for almost a century and the shameful increase in family separations is the direct result of a Trump administration policy which no other president has enforced with the same enthusiasm.

The right move is to back comprehensive immigration reform -- an earlier version of which every Democratic senator voted for, along with a handful of Republicans, including Lindsey Graham. It would increase border security while also finding a way to bring 11 million illegal immigrants out of the shadows, and it would permanently protect the Dreamers.

Crucially, the earlier proposal -- backed by President Obama -- also was not afraid to elevate the idea of assimilation, as well as the rule of law. But if a Democratic candidate today were to talk about the importance of immigrants learning English -- like Obama did -- so that our country has a common currency of communication, they'd run the risk of being excommunicated from the party. A belief in assimilation is not racist.

Likewise, we see that the Obama administration's support for the Trans-Pacific Partnership is increasingly demonized by Democrats, as well as by President Trump. While no trade bill is ever perfect in the particulars, its overarching goal was to contain Chinese expansionism by increasing the economic ties between America and other independent Asian nations.

The protectionist impulse now embraced by the far left and far right -- Bernie Sanders and Donald Trump --- is something close to the new establishment position while actually weakening America's influence around the world. We need to be strengthening multilateral institutions, not dismantling them, a stance which dovetails with autocrats' agendas.

These are just a few examples -- we could add Obama's support for charter schools at a time when candidates like Bernie Sanders and Bill de Blasio seek to dismantle them as some kind of fifth column designed to undermine public education rather than an effort to increase equality of opportunity. We see it in candidates' desire to say Obama's actions on climate change were woefully insufficient, as were his steps toward criminal justice reform. Good people can disagree in degrees, but the impulse to invalidate arguments as being un-Democratic is intolerant and unwise.

This castigation of many Obama-era policies as Republican talking points is especially ironic given that Republicans have abandoned many of the core policies that once united their party: free trade, family values and fiscal responsibility.

In the feedback loop of our politics, the fact that Donald Trump has intimidated his party with a populist mob mentality has emboldened some folks on the far left to feel that arguments about electability or reuniting the nation no longer matter.

This risks not just losing an election but compounding how dangerously off-center our politics have become. Successful presidents are committed to forming a more perfect union -- and therefore trying to unite rather than divide their party as well as the nation -- and that is a wise and winning course despite the aberrational electoral success of Donald Trump.

There is a dangerous temptation to believe that Donald Trump's breaking of democratic norms means the Democrats can move to the far left without electoral consequences in a country where self-identified conservatives still outnumber self-identified liberals by a substantial margin. Yes, the party needs to ensure that its base turns out in ways it did not in 2016 - but it also needs to win back the Obama voters who cast their ballots for Donald Trump.

A political party needs both wings to fly, and if the policies of Barack Obama -- a person who is still America's most admired political leader -- are being castigated as Republican talking points, that's a sign of how unmoored our political conversation has become from reality. That's vital to note, because beyond winning the nomination, the primary responsibility of the next president will be reuniting the nation.