Trump's authoritarian tendencies come back to bite him 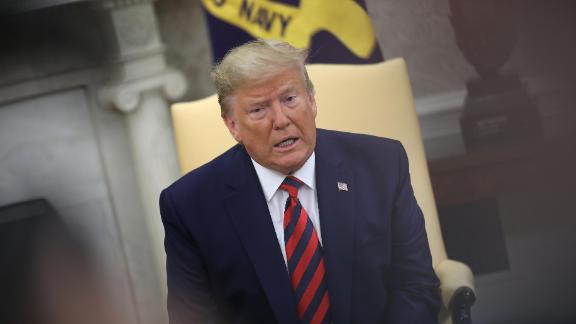 The White House is acknowledging for the first time that officials did direct the transcript of President Donald Trump's phone call with Ukraine be filed in a separate classified system. CNN's Kaitlan Collins has the details.

Here's a secret about authoritarian-minded leaders like President Donald Trump: They are their own best friends (they usually have few real friends), and they are their own worst enemies, especially when things are not going well for them.

This is Trump's current situation. Revelations that he tried to get Ukraine President Volodymyr Zelensky to investigate Democratic presidential candidate Joe Biden and his son Hunter Biden have led to the House Democratic leadership to announce the start of an impeachment inquiry. Trump has reacted predictably. "Another Witch Hunt!" reads one of a flood of Tweets on the subject.

Yet Trump has brought this situation on himself by demanding that Americans, including those who work in the White House and in the federal government, accept his autocratic personal style of governance, scorn for the rule of law and insatiable need for loyalty to him over duty to country. For at least some in the government — like the whistleblower and the intelligence community's inspector general — Trump's actions warranted sounding an alarm.

This is a predictable outcome for a leader who has been following the authoritarian playbook from the start. Authoritarians view public office in an entirely proprietary manner: It is their vehicle for power and enrichment for them and their family. National security, economic policy, and foreign relations must be subordinated to their personal agendas. In Trump's case, his agenda is a combination of making profits for the Trump Organization — for example by allegedly pressuring the US Air Force crews to stay at his Turnberry resort in Scotland during refueling stops (something Trump has said he knows nothing about) — and fending off anything and anyone that might threaten the consolidation of his power. This includes Biden, a man he evidently feels might take him out of office in 2020.

Leaders like Trump behave in predictable ways and follow foreseeable patterns as they use public office to further their private goals. First, they need co-conspirators: an inner sanctum of loyalists who will do their bidding and keep their secrets. This is why they often hire their own family members and why they fire so many other people — it can take a while to find the right individuals to infringe democratic norms for them. Trump now has the man he calls "my attorney general," William Barr, who gave misleading information about the Mueller report to protect his boss and is cited repeatedly in the whistleblower's report as being involved (along with Trump's lawyer Rudolph Giuliani) in the request for a favor from the Ukrainian leader, although the Justice Department released a statement denying that Barr had any contact with the Ukrainians.

Second, if they rule in a nominal democracy that has expectations of transparency and accountability, authoritarians must take special steps to keep their side-dealings from becoming part of the official record. According to the whistleblower complaint, the transcript of the phone call with Zelensky was put onto an electronic records system used normally for highly sensitive materials.

The White House says lawyers directed the move. Trump has a history of such actions, from making log books of who visits him privately at the White House to confiscating the notes of his meetings with Vladimir Putin and concealing details of those encounters even from very senior officials in his administration.

The effort by executive branch to stymie the whistleblower complaint speaks to the disrespect Trump and his cronies have shown to the intelligence community from the start of his presidency. Days after the inauguration, his adviser Kellyanne Conway said it was time for the President "to put in his own security and intelligence community," a statement that likely did not go over well and certainly foreshadowed the situation in which we now find ourselves.

Then came the firing of FBI Director James Comey in May 2017 while Comey was leading the investigation into Trump's possible collusion with Russia during the 2016 election, and Trump's labeling of Comey and acting FBI Director Andrew McCabe (also fired) as traitors. The President is using that same term for the whistleblower and his sources now, even alluding to them meeting with an authoritarian-style end — "what we used to do in the old days when we were smart," in Trump's words.

Authoritarians are never more dangerous than when they feel vulnerable. It is essential that the impeachment inquiry move swiftly and resolutely, since Trump will become more violent in his rhetoric and vindictive in his actions as each day passes. This too is foreseen the authoritarian playbook, which has no page for impeachment: the egos of such rulers can't contemplate such a fate.

Once men like Trump get enough power, it is very difficult to get them out, no matter how many corrupt actions they commit. The window for stopping his attempt at autocratic capture is now.

Utica-Rome Speedway up for sale