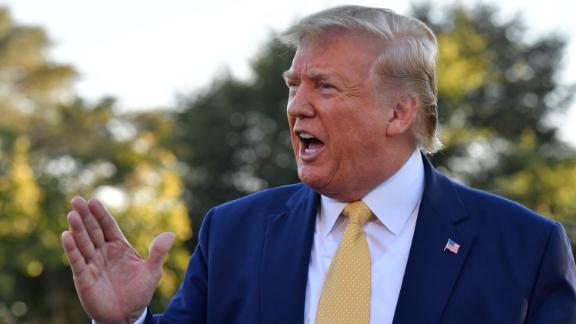 CNN and other reporters have called on President Trump to denounce a fake video of him shooting members of the news media. According to The New York Times, the clip appears to be edited from a church massacre scene in the 2014 movie "Kingsman: The Secret Service."

It took hours for the White House to issue a condemnation of the disgusting video obtained by the New York Times that depicts President Trump violently slaughtering journalists and political opponents (including former President Obama and sitting members of Congress). The footage, created from a grisly scene in a Hollywood movie, was shown at a meeting of the pro-Trump political group, American Priority, at the Trump Doral resort.

If history is any guide, Trump's supporters will concoct excuses or even pass the video off as a joke.

White House press secretary Stephanie Grisham said that Trump had not yet watched the video, and added that "based on everything [Trump] has heard, he strongly condemns this video." Tim Murtaugh, a spokesman for Trump's campaign, told the Times "That video was not produced by the campaign, and we do not condone violence."

But the damage is already done: the Trump movement has pushed America another step closer to the dangerous idea that violence is part of politics as usual.

From the early days of Trump's campaign for President, the candidate and his followers have openly encouraged political violence. In some cases, his supporters have committed it. In November of 2015, activist named Mercutio Southall was cursed, punched and beaten at a Trump rally as the candidate shouted, "Get him the hell out of here!"

The next day he affirmed the violence, saying "maybe he should have been roughed up." In another case, as followers accosted a protester, Trump said: "Try not to hurt him. If you do, I'll defend you in court, don't worry about it."

It happened so frequently that Mashable created a March 2016 video compilation of Trump's repeated statements at rallies, urging the crowds to commit violence. Around the same time, Trump's thuggish campaign manager, Corey Lewandowski, was charged with battery for grabbing a reporter as she attempted to ask Trump a question (authorities confirmed that the mauling took place, but dropped the charges after concluding the conduct was not criminal).

As countless editorial boards, civic leaders and elected officials warned, Trump's constant calls for violence stirred followers to action. In 2018, one disturbed supporter, Cesar Sayoc, mailed more than a dozen inoperative pipe bombs to media outlets (including CNN), Democratic politicians and other prominent Democrat that Trump has condemned. Sayoc described the havoc and rhetoric of Trump rallies as a "new found drug." (He has been sentenced to 20 years in prison.) "These terrorizing acts are despicable and have no place in our country," Trump said at the time.

And now, we see a video graphically depicting a character with Trump's face superimposed on it, shooting, stabbing, clubbing and impaling elected officials, news organizations, President Obama and a civil rights movement, Black Lives Matter. While the video has been online for at least a year, its use at a political gathering of the President's supporters-- held at the President's resort--represents a further descent into the muck.

Trump has never made a secret of his feelings about inciting violence. His supporters have taken the cue and run with it. For the rest of us, the question is what we plan to do about it.

At a minimum, every leader with a platform should quickly, publicly and emphatically condemn the march toward political violence that Trump has encouraged for years now. And Congress should consider holding hearings to compile the abundant evidence of Trump's pro-violence statements and draft them as an article of impeachment.

It's the best way to make clear to future candidates that rowdy incitement to violence isn't a joke or politics as usual, but akin to dropping lit matches in a room full of dynamite -- a level of callous irresponsibility that cannot be tolerated or dismissed as a joke.