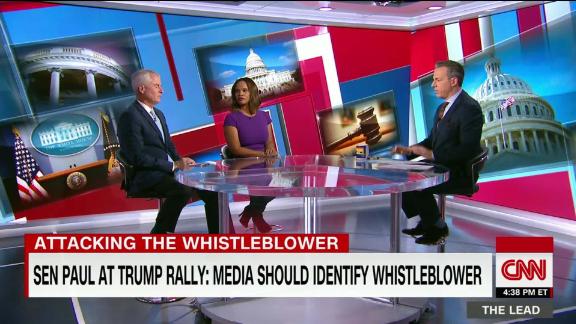 From the moment in September that the whistleblower complaint revealing the President's involvement in the Ukraine scandal was made public, President Trump and congressional Republicans have attacked everyone involved with bringing it to the surface.

Targets have ranged from the whistleblower himself, to career diplomats and soldiers, to the Democrats running the investigation. Trump and his GOP enablers have done this all while failing to address the underlying evidence of alleged wrongdoing by the President and his team. Some have even made the case that what they call the unfairness of "the process" of investigation actually negates any wrongdoing.

The latest attack on the process came in the form of an op-ed Sunday in the Wall Street Journal by Representatives Jim Sensenbrenner and Steve Chabot. They were House impeachment managers during President Bill Clinton's impeachment 20 years ago.

Back then, it was their role to argue for the President's removal in the Senate, a process, they write, that was always fair and afforded Clinton due process.

I was there, too, and their argument is specious at best, downright dishonest at worst. From the beginning, the Republicans have inaccurately compared Clinton's impeachment to the current inquiry about President Trump.

Because the William Barr-led Department of Justice saw no reason to investigate the Ukraine affair, the House Intelligence Committee was left with the job of gathering evidence, interviewing witnesses and investigating the shadow foreign policy of President Trump -- including the withholding of US security aid to Ukraine to press that country to manufacture of political dirt on former Vice President Joe Biden.

This committee investigation has been done in closed door depositions, exactly as in 1998. The big difference is that the Republicans in this case have been represented in the depositions and were afforded the chance to cross-examine any witness -- and likely do the President's bidding.

Sensenbrenner and Chabot also decry the use of selected leaks as another point of unfairness to the President. They conveniently forget the daily leaks that came out of special counsel Kenneth Starr's office during the Clinton impeachment, designed to put pressure on the President.

The Republican representatives go on to argue in their op-ed that it's the Democratic committees, Intelligence and Judiciary, that will set the ground rules for the impeachment articles to be drafted and voted on. Again, with short memories, the representatives know full well that rules for transacting any business in the House are dictated by the party in power. In 1998, the Republicans were in charge and crafted rules to serve their political goals, not the president's. The same will be true now with the Democrats in control.

Perhaps Sensenbrenner and Chabot's biggest omission however is that they fail to place any focus at all on the recalcitrance of this White House.

In 1998, the president and the White House cooperated with both the special counsel and Congress. When valid subpoenas were issues, witnesses, including the President, presented themselves and testified before the grand jury. Documents and electronic records were also turned over to the investigating authorities again.

That is in direct contrast to the approach being taken by President Trump. He has ordered White House officials and staff to defy valid Congressional subpoenas. He has sought to discredit and intimidate those career employees who have agreed to honor the House subpoenas. The President has even encouraged other Republicans to reveal the identity of the whistleblower, despite the protections against intimidation and retaliation written into the whistleblower law.

Due process, the Republican representatives forget, is a two-way street. If the White House refuses to cooperate and continues to obstruct the committees' investigations, it can't realistically expect the House to offer a seat at the table in the process. In the Clinton impeachment, our demands for due process, even if they were ignored at times, were based on our ongoing cooperation with the investigation. And that afforded us some fairness in the proceedings.

There was absolutely no reason or legal precedent for having the White House involved in the early investigative phase of this inquiry back then. President Clinton's White House was not involved and had no expectations of being involved.

My prediction is that when Intelligence chair Adam Schiff and Judiciary chair Jerrold Nadler hash out the rules going forward, they will be fair and provide due process protections to the President.

But as parties to obstructing the entire inquiry, it's not exactly a right Trump and his White House have earned.

And a note to Representatives Sensenbrenner and Chabot: you were there in 1998, you know better than to make unfounded, misleading and outright false claims and comparisons. Doing so cheapens a political process that has already been debased by this President.