Commentators: Who won the Democratic debate 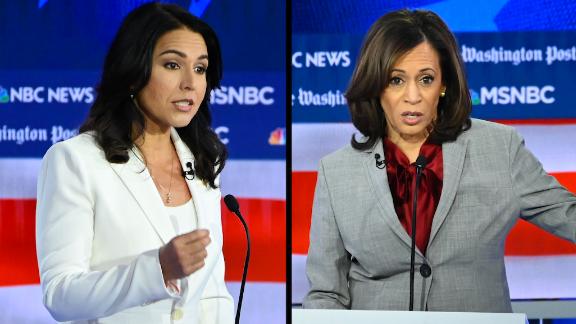 Democratic candidates for president took part in their party's fifth debate on Wednesday night in Atlanta and CNN commentators weighed in. The opinions expressed in these commentaries are those of the authors

Paul Begala: Buttigieg was the winner

After spending all day watching Republican congressmen (and one Republican congresswoman) during the impeachment hearings mindlessly denying the Everest of evidence of Donald Trump's alleged criminality, the Democratic debate was like a wake-up call from the real world.

Elizabeth Warren and Bernie Sanders stayed true to form, pushing Medicare for All and a wealth tax. Kamala Harris was a sharp and incisive prosecutor, rhetorically eviscerating Hawaii congresswoman Tulsi Gabbard over her criticism of Barack Obama and other Democrats. It makes you long to see Harris carve up Donald Trump on a debate stage. Later, on foreign policy, she quipped, "Donald Trump got punked," and then cited chapter and verse on how our President has been bamboozled on North Korea and all around the world.

Joe Biden was at his Obamaesque best when he disavowed liberals chanting "Lock Him Up" at Donald Trump. He called for accountability, both in impeachment and at the ballot box. But he pointedly refused to politicize his Justice Department the way Trump has. And good for him. As my friend David Axelrod has noted, when we replace a President it is because we want the remedy, not the replica.

Amy Klobuchar, after a shaky start, found her footing with her trademark self-deprecating wit ("I raised $17,000 from ex-boyfriends, and I'd like to point out: it is not an expanding base.").

Cory Booker reprised his role as a happy warrior, but the winner may have been Pete Buttigieg. The South Bend mayor put in a competent performance, but, strangely, his competitors didn't lay a glove on him. Also-rans like Tulsi Gabbard and Tom Steyer took more punches than the guy leading in the polls in Iowa and New Hampshire.

Still, the contrast between each of them and the preening, prevaricating Republicans we saw in the House hearing room today could not have been more clear. Democrats should be proud of the people who seek to lead them; Republicans should be ashamed of their politicians seeking to mislead them.

Paul Begala, a Democratic strategist and CNN political commentator, was a political consultant for Bill Clinton's presidential campaign in 1992 and served as a counselor to Clinton in the White House.

Joe Biden didn't have a great night...again. But he's still the front runner, and he needs to start behaving like he's thinking ahead.

It's easy to forget that at this point in the presidential contest eight years ago, Newt Gingrich was leading in most of the polls for the Republican nomination. And before that Rick Perry, Michelle Bachman and even Herman Cain all took turns with the lead. But in the end, of course, the nomination went to Mitt Romney.

The churn in the polling in 2011 turned out to be symptomatic of a Republican primary electorate that was never able to reconcile its more moderate majority with its conservative base. When the moderates eventually won, Mitt Romney was best understood as a consensus pick that never captured the enthusiasm of the base he would need in November.

Despite the recent Buttigieg surge and Warren slump, Vice President Biden still looks like the most likely nominee. He still has the national name recognition, fundraising capacity and organization necessary to get over the finish line after Super Tuesday. But his performance in this debate is a reminder that he's falling into many of the same traps as the Romney camp did -- including a hide-and-seek media strategy that suggests senior staff are so afraid of their candidate's potential gaffes that they keep him away from both reporters and voters.In Romney's case, they waited until it was too late.

During his first answer on Wednesday night, Biden stumbled his way into a statement on electability. It's the number one issue for Democratic voters, but being "electable" isn't a self-fulfilling prophecy for success. Just ask President Mitt Romney.

Sarah Isgur is a CNN political analyst. She has worked on three Republican presidential campaigns and is an adjunct professor at George Washington University's School of Media and Public Affairs. She is a graduate of Harvard Law School.

Errol Louis: Biden takes high road on "lock him up"

Joe Biden appears to have adopted the slogan of his former boss, President Obama: when they go low, we go high. When asked about Trump's role in dividing the nation, Biden pointedly ruled out the idea of ordering an investigation or prosecution of Trump after he leaves the White House.

On the hot-button question of whether Trump should be criminally charged, Biden said it would inappropriate for him to order the prosecution or exoneration of Trump or anybody else. ""I would not direct my Justice Department like this president does. I'd let them make their independent judgment," he said.

That may be a disappointment to angry members of the Democratic base, some of whom have taken to chanting "Lock him up!" at rallies, calling for Trump to go to jail.

But Biden is explicitly disavowing that kind of talk.

That is a smart way for Biden to hit back at Trump: by presenting himself as fair, confident, restrained and respectful of American laws and traditions. It makes him look like a winner, which is what Democratic voters are looking for.

Errol Louis is the host of "Inside City Hall," a nightly political show on NY1, a New York all-news channel.

Frida Ghitis: The night belonged to the women

After an exhausting day of hearing how President Donald Trump subverted US foreign policy on Ukraine, the Democratic debate brought a reassuringly strong discussion on foreign policy, offering solace to those of us worried about Trump's approach to policy, not just on Ukraine but across the globe.

The foreign policy questions were excellent. In fact, the four women moderators did a top-notch job. But it was Andrea Mitchell, NBC News chief foreign affairs correspondent, who threw the sharpest challenges, asking former Vice President Joe Biden how he would handle Saudi Arabia, and Bernie Sanders if he would negotiate with the Taliban. But it was her question to Sen. Kamala Harris that elicited the most effective, thoughtful, impressive response of the night.

Mitchell asked Harris about Trump's interaction with the North Korean leader, and whether she would compromise with Kim Jong Un. The California Senator opened with what was probably a planned zinger, "Donald Trump got punked," by Kim, adding that Trump "has conducted foreign policy since day one borne out of a very fragile ego."

She followed with a concise exposition of all that is wrong with Trump's foreign policy, and all that America should be on the global stage. It was a brilliant strategic double-prong attack, simultaneously hitting the President and boosting her own standing. America, she said, is respected because it keeps its word, but Trump has turned its back on previous agreements and on allies. Trump, she said, is the greatest threat to our national security.

Both Harris and Sen. Amy Klobuchar had a very strong night. Mayor Pete Buttigieg, who many thought was wearing a target on his back due to his front-runner status in Iowa, didn't face the expected pressure until the final minutes of the debate. He was his usual impressive, articulate, smart, youthful presence. Cory Booker, as always, was bright, eloquent and charismatic. It remains something of a mystery that he hasn't gained more traction.

The night belonged to the women, on and off the stage. Good questions and good answers. There's hope.

Frida Ghitis, a former CNN producer and correspondent, is a world affairs columnist. She is a frequent opinion contributor to CNN, a contributing columnist to The Washington Post and a columnist for World Politics Review. Follow her on Twitter @fridaghitis.

Jen Psaki: I'm going to sleep with a good feeling about the Democratic field

My prediction going into Wednesday's Democratic debate was that Mayor Pete Buttigieg was going to need to eat his Wheaties because the other candidates would go after him hard. With the exception of some light punches, he would have survived on a fruit salad.

The question is why? Is it because his opponents don't take his candidacy seriously? That seems unwise. Is it because the attacks of the last debates have not prompted upward movement in the polls for the attackers? That realization would be a welcome change.

It may be that the contrast between this debate contest and the impeachment inquiry hearings that have consumed Washington for the last two weeks is just that stark — and that even tough policy challenges feel mild in comparison with the depressing display led by Devin Nunes and the GOP band of conspiracy-theory pushing hacks. Either way I am going to sleep tonight with a good feeling about the field and a little hope that the dark days of the Trump era may soon be behind us no matter who emerges from the Democratic side.

Jen Psaki, a CNN political commentator, was the White House communications director and State Department spokeswoman during the Obama administration. She is vice president of communications and strategy at the Carnegie Endowment for International Peace. Follow her at @jrpsaki.

Julian Zelizer: Harris shows that she can deliver a punch

The Democratic debates are a test of many things, one of which is how each candidate would do taking on President Trump in one of what will certainly be one of the most ruthless, brutal and vicious campaigns that we have seen in many decades.

Senator Kamala Harris was far ahead of her colleagues tonight, delivering a number of sharp and direct attacks against the administration. When the discussion centered around impeachment she spoke about a "criminal enterprise" being run out of the Oval Office. "Donald Trump got punked," she said when the conversation turned to foreign policy and North Korea.

The truth is that victory will require much more than being able to deliver a rhetorical punch. A winning Democrat will need bold ideas, a savvy campaign strategy, and strong local organization and fundraising operations.

But with President Trump as the opponent, the Democrats will also need someone who is comfortable with brass-knuckle politics, particularly during the debates. On this front, Senator Harris demonstrated once again tonight that she can deliver the goods.

Julian Zelizer, a CNN political analyst, is a professor of history and public affairs at Princeton University and author of the forthcoming book, "Burning Down the House: Newt Gingrich, the Fall of a Speaker, and the Rise of the New Republican Party." Follow him on Twitter: @julianzelizer.