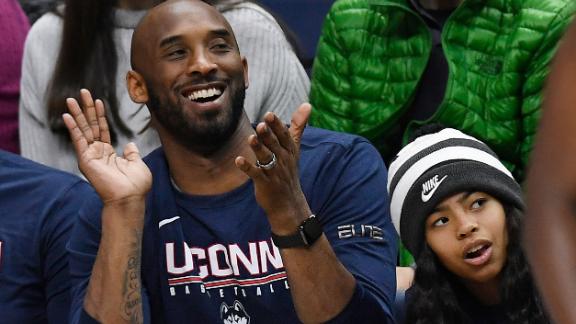 Basketball star Kobe Bryant and his daughter Gianna were headed to a basketball game Sunday afternoon when they were killed in a helicopter crash.

What caused the chopper that was carrying Kobe Bryant and eight others to crash on Sunday?

At around 9:45 a.m. (12 p.m. ET) on a Sikorsky S-76B helicopter was lost against a hillside near the town of Calabasas, California, about 30 miles northwest of Los Angeles. We are now painfully aware that the aircraft was carrying nine people that included Bryant and his 13-year-old daughter.

National Transportation Safety Board officials were on the site Sunday to begin their investigation, and like them, we will have to be patient and wait to learn what caused this disaster. In the meantime, I'll try to shed a little light here about factors to consider.

This particular helicopter was manufactured in 1991 and is owned and operated by what appears to be a well-established charter operation. (The company, Island Express Helicopters released a statement that said, in part, that the pilot, "Ara Zobayan, was our chief pilot. Ara has been with the company for over 10 years and has over 8,000 flight hours. We are working closely with the National Transportation Safety Board (NTSB) to investigate the cause of the accident and we are grateful to the first responders and local authorities for their response to this unimaginable accident.") It is a sophisticated piece of machinery designed as the commercial version of the military Black Hawk. The helicopter is far more advanced than, say, the type seen on the opening intro of the 70s TV show M*A*S*H.

Two Pratt and Whitney turbo shaft engines power the large, main rotor and the tail rotor. In other words, two small jet engines operate in unison to supply power to the gearbox that turns the helicopter's blades, making it a very reliable system.

The Sikorsky departed the John Wayne, Orange County Airport northbound toward Van Nuys Airport. Reports from the Aviation Weather Chart Archive indicate that the weather at departure was overcast, with a cloud ceiling of 1,000 feet and a visibility of four miles. Although conditions would be considered marginal but legal for fixed wing aircraft -- the kind I have mainly flown for decades -- operating under the visual flight rules set by the Federal Aviation Administration, a helicopter has lower requirements because of its greater maneuverability; it can slow its forward speed to a virtual crawl and hover.

So, the weather conditions were not unusual for a helicopter pilot to fly in, nor were they unsafe at the departure airport.

Yes, both the Los Angeles Police Department and the county sheriff's department apparently grounded their own choppers, most likely because their flying policies are more restrictive than a charter helicopter operator (law enforcement flying is often more challenging than just a commercial flight from A to B).

In the case of the doomed helicopter, it would appear that as the flight approached the Van Nuys Airport, following Interstate 5, the visibility was becoming more restrictive. Because of the reduced visibility and the resulting air traffic control requirements for separation between aircraft, the helicopter was asked to remain clear of the airport's airspace while another airplane was completing a procedure. The Sikorsky's pilot circled in a visual holding pattern for approximately 12 minutes, according to tracking data.

After the helicopter was released from the holding pattern, the aircraft was given a clearance to follow Interstate 5 and then follow Freeway 101. The pilot's communication with air traffic control was professional and without any noticeable stress. After over four decades of experience listening to airborne communications, my opinion is that the pilot's responses and tone reflected his familiarity with the routine. You can hear it here.

All that said, the flight was approaching rising terrain with reduced visibility. In-flight visibility is often less than the horizontal visibility reported on the ground because the thickness of clouds generally increases with altitude. In other words, it can be harder for pilots to see through the clouds in front of them at the higher altitude than controllers might think, from their position on the ground.

If the pilot remains over a road on his or her route to Point B, terrain shouldn't be a major issue because a highway cuts through or goes around hills and obstacles, so the path is clear. But even pilots experienced with a particular route can become disoriented in reduced visibility conditions. If you've driven the car home on a foggy day, you understand. Perhaps the helicopter pilot deviated only for a moment away from the highway and encountered rising terrain without time to correct, and struck the hillside.

The tracking data in the last 15 seconds of the flight indicates that the helicopter was in a rapid descent, accompanied by a rapid increase in airspeed. The increase in airspeed is analogous to pedaling a bicycle downhill. It's possible that the data indicates the pilot made a diving turn away from terrain at the last minute. Investigators will look at everything including whether there was a mechanical abnormality that distracted the pilot, or caused the helicopter to deviate from a safe flight path.

Regardless, the evidence of a relatively large debris field with relatively small pieces of the aircraft scattered at the crash site indicates the helicopter hit the ground at a high rate of speed. Even if a helicopter experiences an engine failure, pilots use a well-practiced maneuver called "autorotation," where the rotor blades spin using only aerodynamic forces, allowing the aircraft to touchdown at a survivable rate of vertical speed. So, the debris field is an indication that something went terribly wrong.

The NTSB will be conducting a thorough investigation with their focus on items such as, the helicopter maintenance record, weather data, air traffic control operation, aircraft weight and balance, pilot experience, pilot duty times, and pilot toxicology.

Like all aviation accidents, this is an awful tragedy. This investigation may take upwards of a year to find a probable cause, which may involve multiple factors. With this crash being high profile, the investigator in charge will most likely reveal additional information within the coming days. Stay tuned and be patient.