3 African leaders: The smart step to fight the virus 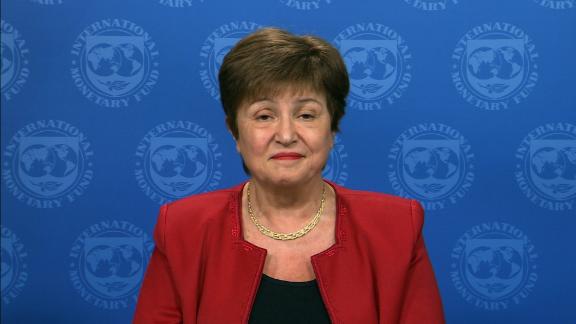 Christiane speaks with Kristalina Georgieva, Managing Director of the International Monetary Fund, about the economic consequences of the coronavirus.

With Covid-19 bringing economic activity to a halt across much of the world, there is wide recognition that some of the most vulnerable nations will have a hard time covering their debt payments. When finance ministers of the G20 nations agreed this week to freeze debt repayment for the world's poorest countries, it was a step in the right direction.

But in Africa, the entire continent deserves solidarity and smart debt relief -- and it needs it now.

While we eagerly welcome debt relief for Africa's lower-income nations, the region's middle-income countries -- like Kenya, Seychelles and Tunisia -- also need relief at this unprecedented time. Given the interconnectedness of Africa's economies, omitting them from this program will leave the region less stable in the face of this crisis. Given the tight web of trade, travel, remittances and regional health security which naturally binds the continental club to each other, Africa is bound together as a whole -- one that must not be left out of the global stimulus program.

The continent has made progress worth investing in. A rising, educated middle class is driven in part by graduates from the best universities on the continent, which are gaining recognition around the world. In 2019, Kenya-based Strathmore University defeated Harvard University in a competition based on World Trade Organization international trade law. In 2017, Google's worldwide coding competition saw its first African winner, from Cameroon. Egypt is building a museum to rival the Louvre. Seychelles sits on the cutting edge of climate financing, having launched in 2018 the world's first sovereign "blue bonds," investment vehicles that go toward projects deemed ocean-friendly. Tunisia not only saw the beginning of the Arab Spring and its young people work hard toward democracy, it is now fostering start-ups with tax breaks and time off for entrepreneurs to launch their endeavors.

African countries have made advancements, and they've done it by embracing the opportunities of an interconnected regional and global economy.

But Africa remains vulnerable. It is moving fast, but it has limited capacity to absorb shocks. The increased interconnectedness of the continent also implies that any support to the continent will be more effective if extended to all. As a continent, Africa will come out of this crisis faster if it works together.

Covid-19 is taking a toll -- and not just in countries facing the most significant financial challenges. Tourism is frozen, and foreign direct investment has collapsed. In countries like Tunisia, a prolonged economic collapse could threaten to undo some hard-won democratic gains. The region and the world at-large cannot afford another period of prolonged unrest due to rising inflation and no jobs.

Seychelles, another emerging-market African economy, is battling the pressures of climate change while struggling to protect its pristine beaches for high-end tourism. Amid Covid-19, most economic activity is frozen. Tourism, nearly a quarter of its GDP, is at a standstill. The loss of travel and tourism could be devastating for the continent: Worldwide, the UN's World Tourism Organization expects tourism to drop 20% to 30% in 2020, for a global loss of $300 billion to $450 billion. Africa's tourism industry is growing second-fasted among world regions, according to the World Travel and Tourism Council, accounting for 8.5% of GDP in 2018.

These middle-income countries are also home to migrant workers from within the continent. ("In 2017," a UN report noted, "there were about 41 million international migrants from, to, or within Africa.") Countries like Kenya and South Africa host significant numbers of workers from elsewhere on the continent, and remittances -- money sent back home by workers -- flowing from these middle-income countries to lower-income African neighbors can be important to the economies of the latter and are yet another way in which economies across the continent are linked. Africa does not depend heavily on trade within the continent, but that is poised to change. Trade among African countries accounted for 17% of total African exports in 2017 -- a figure lower than the 68% seen in Europe or 60% in Asia -- but Africa has been leading the international charge for lowering trade barriers and developing economic connections, working toward an African Continental Free Trade Area Agreement that would make Africa the largest free-trade area in the world.

A contraction in Africa's middle-income countries also has an impact on the continent's collective trade balance with the rest of the world, as 88.5% of all African exports to Europe originate from countries not among the World Bank's International Development Association borrowers, according to UN trade data. These exports benefit the entire continent.

In a global recession such as this one, a call to support the low-income borrower countries is appropriate. But given the linkages between emerging economies across the continent, if the rest of Africa was left out of the assistance program, it won't be effective. That's why everyone, middle-income countries included, needs help -- and why the interdependence of Africa's economies must be kept at the top of mind, as international leaders approach key questions over the next months, and beyond, over how to save the global economy and confront the issue of international debt repayment.

It is in this respect that we join the African finance ministers' call for a debt standstill for all of Africa. Fiscal space created in Tunisia will create jobs and protect the democratic movement finally underway. Liquidity extended to Kenya, Morocco or Nigeria will ensure that small and medium-sized businesses in Benin, Mauritania and Togo can build back better.

Covid-19 does not distinguish between national income categories, and therefore assistance to combat this global threat must be commensurate with the magnitude of the problem. Countries everywhere will be pressed to innovate fiscal solutions, stave off the worst of the crisis, and bring government help to bear on their economies, in whatever fashion they can. Giving middle-income countries the space to do so will help everyone, in the end.

Most importantly, humanitarian help is needed, and as world leaders debate answers to Covid-19, we must keep in mind that as long as the virus lives in one of us, it lives in all of us.

$2 million available to some Utica homeowners for exterior improvements