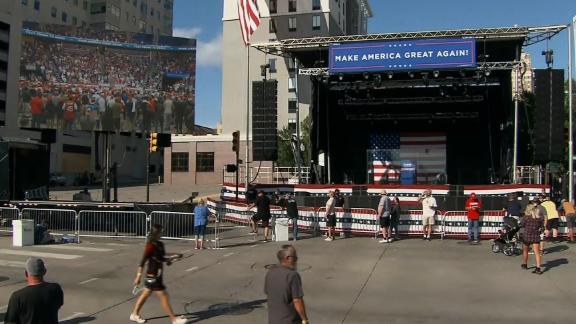 President Donald Trump's campaign canceled a previously scheduled speech to an expected overflow crowd outside of his campaign rally at the BOK Center in Tulsa, Oklahoma, because turnout numbers are lower than expected. CNN's Abby Phillip reports.

Donald Trump loves packed campaign rallies, positive media coverage and not being the butt of jokes. Based on those metrics, Trump's campaign rally Saturday in Tulsa -- his first since the Covid-19 outbreak -- was a big fat failure on all counts.

First, there was the crowd size. What was supposed to be Trump's dream campaign rally to overflow crowds -- in a state he won in 2016 by a whopping 36 points (65% to 29%) instead turned into a nightmare.

The Trump campaign had boasted in advance of the massive demand for tickets that would not only pack the 19,000-seat venue, but would cause crowds so large they needed to build an outdoor stage for the overflow.

Come Saturday night, however, only about one-third of the arena was filled, with the Tulsa fire marshal estimating that approximately 6,200 people were in attendance. Given the paltry turnout, the Trump campaign was also forced to cancel the overflow outside event -- but not before first spewing the baseless cover story that the Trump supporters had been scared off by protesters.

Trump's rambling speech/performance added to his own nightmarish night when he showed off to his fans how he could drink a glass of water with one hand. (Seriously.) Trump first lashed out at the media for suggesting he had health problems because he had used two hands to navigate bringing a glass to his mouth while delivering the commencement address at West Point a week earlier. After his one-handed water downing in Tulsa he then defiantly threw the empty glass on the stage, inciting cheers from the crowd of "Four more years!" All that was missing was Trump mimicking "Saturday Night Live" by yelling out, "Live from New York, it's Saturday night!"

Unsurprisingly, the rally prompted both negative headlines and countless jokes at the expense of the thin-skinned Trump. A small sample of the sea of reports ranged from, "Trump rallies in red-state America -- and faces a sea of empty blue seats" to "Trump's Tulsa crowd went wild after he proved he could drink a glass of water with 1 hand."

It got worse for Trump on his go-to social media platform, Twitter. There, trending just behind "Father's Day" Saturday night into Sunday morning was a joyful roast at Trump's expense, many including the hashtags, "Everyones Laughing At You Donald" and "Trump Rally Fail." There may have been more jokes directed at Trump on Twitter than people who attended his rally.

A few of the most entertaining tweets include one from legendary journalist Dan Rather who wrote, "Paging Sean Spicer for a crowd estimate in Tulsa" -- a reference to how Spicer, Trump's first press secretary, lied to make the turnout for Trump's presidential inauguration sound bigger than it was.

Singer-songwriter Pink took a jab at Trump, tweeting to her 32 million followers: "I think I sold that same place out in five minutes." Democratic Congressman David Cicilline tweeted: "This is President Trump's Fyre Fest." (The 2017 Fyre music festival was a notorious flop.)

Democratic Rep. Ted Lieu of California, referencing a video showing the sparsely attended rally offered up one of the best tweets:

"Why so many empty seats at the #TrumpsCoronavirusRally?

A. Seeing @POTUS is not worth dying

B. @realDonaldTrump's base shrank so much they can't even fill an arena in a red state

C. Campaign lied about how many people got tickets

D. Knives Out is now available on Amazon Prime"

A well-adjusted President might be able to laugh this all off. But we don't have one of those. We have Trump. And one constant about Trump even before he ran for President is that he hates being the butt of the joke. This is a guy who in 2013 lashed out on Twitter against then Daily Show host Jon Stewart and that same year planned to sue Bill Maher for $5 million over a joke the comedian told about Trump being "the spawn of his mother having sex with an orangutan." He continued to slam late-night comedy hosts as a presidential candidate and in the White House, even calling for "Saturday Night Live" to be canceled and suggesting "retribution" against the iconic comedy show.

Trump could simply have put off a rally that was nothing more than a celebration of selfishness and ego during the time of the Covd-19 pandemic -- especially given a Fox News poll Friday found only 23% of Americans thought holding large political rallies now was a good idea compared to nearly 60% who thought otherwise.

But that's not Trump. He appears to have no problem potentially sacrificing the health of Americans -- even his supporters -- if he believes it will help win re-election. The bigger question is whether the anemic Tulsa turnout was because of fears of the coronavirus -- or because Trump's base finally grasped that he only cares about himself?

AP FACT CHECK: Here's how statements by Trump, Biden stack up with the facts