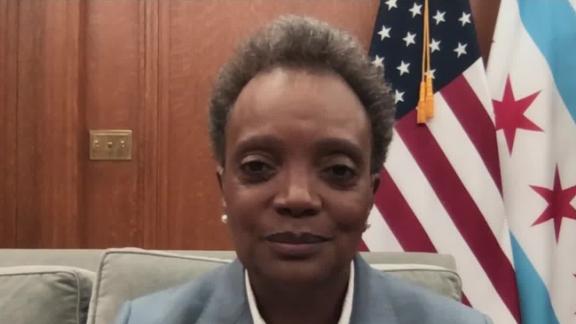 Chicago Mayor Lori Lightfoot (D) responds to President Donald Trump's comments about the way she is handling the coronavirus pandemic.

American presidents generally don't try to invade their own country.

Yet that's effectively what local officials say Donald Trump is up to, as he prepares to send hundreds of federal law enforcement officers to Chicago and to Albuquerque, New Mexico. "Donald Trump's troops" will not be allowed to "terrorize our residents," Chicago Mayor Lori Lightfoot has warned. Albuquerque leaders say they don't need "Trump's secret police."

The President, however, says he's just trying to quell street violence -- which he claims has been fostered by the anti-police policies of radical Democratic leaders. "This bloodshed must end," he said Wednesday.

The federal government does have the authority to send in its own law enforcement agents, even against the wishes of local officials. More commonly, it happens with their consent. And Chicago does have a problem. Last weekend, 63 people were shot, 12 fatally, in the Windy City. Fifteen people mourning the victim of a drive-by killing were wounded in another shooting spree on Tuesday.

Trump thinks he's set a trap: When Democrats complain, he'll paint them as soft on crime. And he's using the heart-rending tales of urban crossfire deaths to tell crucial voters -- women and suburbanites -- that he's the only president who can keep them safe. But the causes of violent crime are deeply complicated and have defied political leaders for years. Drug wars, poverty, a lack of social mobility, underinvestment in deprived communities and a torrent of legal and illegal firearms are often cited by anti-crime campaigners.

The federal officers destined for Chicago and Albuquerque are on a different mission than the camouflaged, unidentified federal forces recently filmed pulling protesters off the streets in Portland, Oregon. But after those scenes, Trump's new initiative is unlikely to get the benefit of the doubt, as his "law and order" election message takes on an authoritarian tinge.

More than a dozen mayors want the Trump administration to remove federal forces from their cities or stop upcoming deployments, according to a letter addressed to the heads of the Justice and Homeland Security departments on Monday and signed by the mayors of Portland; Seattle; Atlanta; Chicago; Washington; Boston; Philadelphia; Denver; Los Angeles, Sacramento, San Jose and Oakland, California; Phoenix and Tucson, Arizona; and Kansas City, Missouri.

"The unilateral deployment of these forces into American cities is unprecedented and violates fundamental constitutional protections and tenets of federalism," the mayors wrote. Unlike local law enforcement agents, federal officers dealing with protests or crime have little accountability toward the communities they police.

The mayors cited the use of federal forces in Portland, Oregon, claiming they had "'snatched' an individual from the street" without identifying themselves and put him in an unmarked vehicle. "These are tactics we expect from authoritarian regimes -- not our democracy," the mayors wrote.

NY restaurant capacity to increase to 75%

Some struggling Americans aren't getting the stimulus payment they were promised. Here's why

A look at what's in the latest COVID-19 relief package

Are you eligible for the FCC's emergency internet discount program? Here's how to find out