Trump is parroting the Kremlin line on the Navalny poisoning 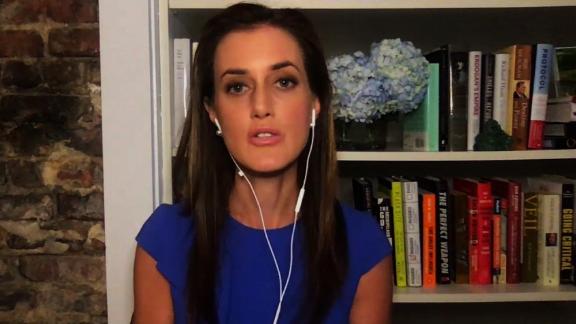 Let's call a lie a lie. It gets tiresome under President Donald Trump as his inaccurate statements pile up, but it's important that Americans are made aware that the President continues to lie about almost everything. Each new falsehood is unsurprising based on his track record with the truth -- but that doesn't make them any less dangerous. They pose risks to our democracy, including the security of our election in November.

During a White House press briefing on Friday, in response to a question about the poisoning of Russian opposition politician Alexei Navalny, President Trump said the US had no proof yet about what had happened. Navalny, an anti-corruption activist and outspoken critic of Vladimir Putin, collapsed on a flight to Moscow on August 20 and was taken to Berlin for treatment two days later.

The German government said last Wednesday that Navalny was poisoned with a nerve agent from the Novichok group -- a Soviet-era chemical weapon. The same agent was used in a March 2018 attack on former Russian spy Sergei Skripal and his daughter Yulia in the English city of Salisbury. A senior German security official told The New York Times that German military scientists "were 100 percent certain that it was Novichok."

Yet during that Friday briefing, two days after the German announcement, Trump answered a question about Navalny's poisoning with a rambling response mentioning China, North Korea and Afghanistan, before turning to Navalny and saying, "We haven't had any proof yet, but I will take a look."

Those statements sound like the US President is serving as a surrogate for the Kremlin -- the Russian government is saying there is no proof and that they need more information from Germany .

Trump's statements are simply not credible. German officials briefed EU as well as NATO members, including the US. This led to a series of supporting statements from US allies including the EU, which said that, "The toxicological analysis carried out by a specialised laboratory of the German armed forces proves that Mr. Navalny was poisoned by a military-grade chemical nerve agent of the 'Novichok' group, developed by the Soviet Union and later, Russia." NATO also condemned "in the strongest possible terms" the attack "with the use of a nerve agent from the banned Novichok group."

US officials issued similar statements. US Deputy Secretary of State Stephen Biegun said he found the German assessment "very credible," throwing cold water on Trump's claim that the Germans haven't shared information and that we need more proof. Trump's own National Security Council issued its own statement on Twitter which clearly said Novichok was used, flagged that the Russians used Novichok in the past and vowed to "work with allies and the international community to hold those in Russia accountable, wherever the evidence leads, and restrict funds for their malign activities."

I have worked on NSC statements in this regard. They are based on the declassification of intelligence and authorized release of sensitive information. US officials and our allies undoubtedly integrated available evidence and intelligence into these public statements.

While the US and our allies made statements based on reliable information, Russia played their favorite game: denial. They said they weren't briefed on the German information even though German officials say they briefed the Russian ambassador. This tracks with Moscow's denials about using Novichok against Sergei Skripal in 2018.

The United States imposed sanctions on Russia after the Skripal poisoning, kicked out 60 Russian diplomats and ordered the closure of a Russian diplomatic property in the US as additional punitive measures. The US also imposed sanctions on Russian GRU officers allegedly involved in the Skripal attack. Yet, despite overwhelming evidence, Russia still refuses to acknowledge their role in the Skripal poisoning, and they're singing the same tune today when it comes to the Navalny attack.

Yet Trump is dangerously echoing Russian propaganda instead of standing with his own team. His statements that he hasn't seen proof do not track with what his own officials are saying, not to mention the statements by US allies.

With his inaccurate statements, Trump is undercutting his own national security team. That diminishes the chance they will be taken seriously on any issues as it's clear they don't speak on behalf of the President. Plus, he's once again distancing himself from US allies. Alliances are already under strain, thanks to Trump's constant criticism of NATO -- which he reportedly has considered withdrawing from altogether. Not to mention that he and German Chancellor Angela Merkel have had a strained relationship.

More broadly, Trump's refusal to condemn a Russian chemical weapon attack on an opposition figure signals that Russia can get a free pass on just about anything -- and Putin won't hear a peep from POTUS. That puts every one of the Kremlin's perceived enemies at risk -- Putin feels emboldened to tick through his macabre to-do list of threats to eliminate.

Trump's refusal to condemn the Kremlin extends to Russian attacks on our elections. But when it comes to the Russian election threats, Trump's not just ignoring the threat, he's actively helping it. The intelligence community said publicly this summer that Russia is using a range of measures, including disinformation, to target our election and to denigrate former Vice President Biden. DHS specifically warned that Russia is amplifying false claims that mail in voting could lead to fraud. Trump has access to all intelligence available on the Russian threat -- not to mention the fact it's public knowledge. Yet he continues to make statements that support Russia influencing elections, including on mail in voting.

While spreading domestic disinformation, Trump officials are also seemingly censoring intelligence. ABC news reported that DHS recently held off sending a memo to law enforcement agencies that called out unsubstantiated Russian attacks on Biden's mental health. Trump and his campaign attack Biden's health -- mental and otherwise -- all the time. DHS said the memo wasn't up to agency standards. But, when coupled with the fact that the DNI has largely canceled oral briefings to Congress on election security, it appears the Administration is censoring intelligence that it finds politically inconvenient.

At the same time, the administration is misrepresenting intelligence to support its own ends. Trump, Attorney General William Barr and National Security Adviser Robert O'Brien continue to disproportionately focus on the threat from China, contending that it is the biggest threat to our elections. Last month the Intelligence Community (IC) said Russia is actively engaged in a range of covert measures targeting US elections. In contrast, the IC cited largely overt measures from China, though they continue to weigh more aggressive action. These two examples aren't even in the same ballpark.

We need accurate information to protect ourselves during this election. Misrepresenting threat levels and censoring certain intelligence may help the Trump campaign but it hurts democracy.

Trump's been doing PR for Putin for a long time, and his actions pose a direct threat to our national security.

Dolgeville residents cleanup after severe storm rips through the village

Durham School Services down about a dozen drivers