Opinion: This is the climate election 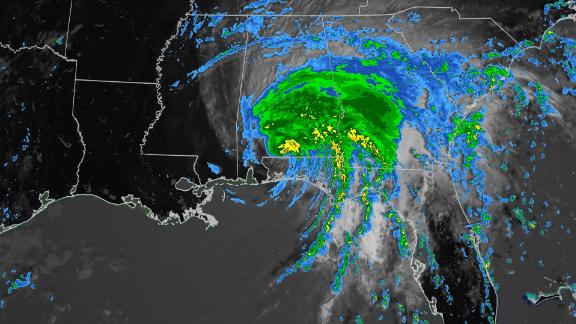 Sally is now a tropical storm -- but the crawling cyclone still has plenty to deliver to parts of Alabama and the Florida Panhandle that it has pummeled in the hours since it smashed ashore as a Category 2 hurricane. CNN meteorologist Jennifer Gray has the latest.

Those tiny words are among the most dangerous of Donald Trump's presidency.

They're part of a playbook the fossil fuel industry has been rolling out for 40 years. The aim is to cast negligent and unwarranted doubt on the reality of climate science, which has told us clearly and for many decades now that humans are driving dangerous warming.

It's not getting cooler and it won't. That's obvious despite what the President said this week at a briefing in California, a state that's burning amid record-setting temperatures.

But Trump's lies are known to distort the way we perceive reality.

Consider his exchange with a California official on Monday.

"I wish science agreed with you," replied Wade Crowfoot, the official.

It does. If you're reading this, chances are you understand that. Most Americans do. You can turn on the news or the weather or, in many places, look outside. Fires are tearing across the West. Five tropical storms are spinning in the Atlantic; that's happened only once before. Siberia hit 100 degrees Fahrenheit this year. Death Valley, 130. A report from the World Meteorological Organization said that the five-year period from 2016 to 2020 is expected to be the hottest on record. Even when there's a cool year or two, or five, that won't change the trajectory, which is unmistakably up -- and because of us. We've warmed the planet about 1.1 Celsius since the Industrial Revolution. We're already living with the dystopian results.

I'd like to watch November 2020 become the definitive climate election.

That's what it is, already.

Black Lives Matter. The pandemic is an American tragedy. These also are defining issues of our time and should not be minimized. Global warming, though, will outlast every human currently living on this planet by a long shot. Carbon dioxide emissions stick around in our planetary systems, causing warming, for 1,000 years. Our decisions today will matter in 3020, and for generations of unborn people who will inherit the unconscionable debt of a planet on fire.

What would happen if the voting public took that to heart?

We'd realize that climate change also is deadly, for one. Outdoor air pollution, much of it caused by burning fossil fuels, kills 4.2 million people per year globally, according to the World Health Organization. Fixing the climate crisis means getting rid of that pollution, and therefore saving millions of lives.

Floods, storms, droughts and fires. I don't need to tell you those are dangerous, too. Dozens have died in Western wildfires this summer. These unnatural disasters are also expensive. Wildfires this year alone could cost over $20 billion, according to Tom Corringham, a researcher at the Scripps Institution of Oceanography.

All of this had mattered for many years.

But we're out of time, which is why this election matters so terribly much.

Earth already is brushing up against red lines established by the international community -- 1.5 degrees Celsius or at most 2 degrees of warming above preindustrial levels.

Again, we're at 1.1 degrees now, and we're on track for more than 3 degrees of warming.

The world may cross the 1.5-degree line within a decade.

A 3-degree future is scarier still.

I don't think of myself as a partisan, but the gulf between Trump and Joe Biden, the Democratic challenger, must be noted. It's wider than it has been in any American election.

Climate advocates had sharply criticized Biden for not proposing policies that would move swiftly enough to eliminate fossil fuel pollution, which is the only way we can truly "solve" the crisis we have at hand. We have to do that and prepare for the warming already happening.

But Biden's team has taken some of that critique to heart, proposing a suite of new plans, totaling $2 trillion in spending, that collectively aim to wean America's economy off its fossil fuel addiction. Biden proposes creating a "carbon pollution free power sector" by 2035 and eliminating net carbon pollution from the entire US economy by 2050.

The Washington Post called the proposal, which Biden announced earlier this summer, "the most ambitious (climate policy) blueprint released by a major party nominee for president." Jeff Goodell at Rolling Stone wrote that the plan could be "transformative."

Quibble with the details. But, again, the gulf between the candidates is oceanic. Biden acknowledges the threat of climate change while Trump continues to deny reality.

"We have to act as a nation," Biden said this week. "It shouldn't be so bad that millions of Americans live in the shadow of an orange sky and are left asking, 'Is doomsday here?'"

It's not getting cooler.

The question is whether they'll vote on it.

CDC: Fully vaccinated people do not need to wear masks indoors, with a few exceptions