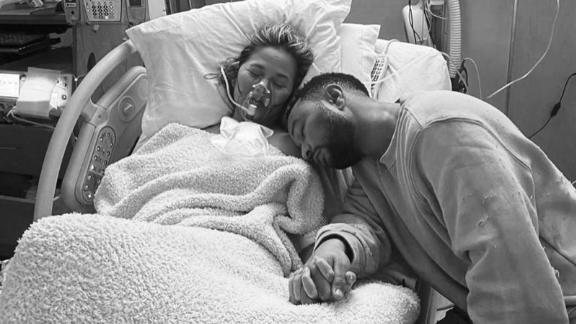 Chrissy Teigen and John Legend shared sad news that they lost their baby after weeks of complications with the pregnancy.

This week, supermodel and personality Chrissy Teigen and her husband, musician John Legend, suffered a tragedy that according to the March of Dimes affects some 10 to 15% of pregnant women a year. Teigen lost her baby, the couple's third child, following pregnancy complications. Late Wednesday night, the couple shared the sad news with their combined 27 million Twitter followers, in a post that said they were "shocked and in the kind of deep pain you only hear about, the kind of pain we've never felt before." On Instagram, Teigen posted an intimate photo of herself hunched over and crying, her hair in a hairnet and hospital bracelets around her wrists.

These were deeply personal posts about a deeply personal matter, and one that, not surprisingly, has exposed the couple to all sorts of equally personal commentary. Many people shared their support of her candor. Writer Erin Gloria Ryan tweeted, "I am normally loathe to call anything on social media 'brave' but @chrissyteigen and @johnlegend making their heartbreak public is actually brave, and will mean a lot to mothers and fathers who have undergone similar tragedies."

For some, it may be easy to criticize Teigen and Legend's openness here in that, well, right now, nearly the entire world is experiencing some sort of personal tragedy. The couple is undeniably privileged. In her announcement tweet, she acknowledged that "every day can't be full of sunshine," and indeed it's possible that statement has never been more true for as many of us at once.

But privilege does not preclude compassion, or the need for support or connection. And no one should be forced to deal with sadness in any prescribed, even socially acceptable way -- Teigen included. If tweeting about her miscarriage makes her feel better about it, right now, let's give her that. There is no right or wrong way to handle grief, but one thing is certain: Not talking about it rarely helps.

Which is why it's to her credit that Teigen did not abstain from sharing even if, she surely realized, someone else out there -- lots of someone elses out there, in fact -- might have it worse. That wouldn't have helped her, and it certainly wouldn't have helped the millions of people who are not as fortunate and who could, arguably, use the help even more. Conversations don't shift because we choose to stay silent.

Those who did choose to politicize the moment are missing this crucial point, including Errol Webber, a candidate for the House of Representatives in California, who tweeted that he hoped the event might make the couple reevaluate their stance on abortion. Others called Teigen out for what they considered a shameless ploy for attention, including right-wing personalities Diamond and Silk, who offered prayers in a tweet but wondered, "how do you conveniently have someone taking photos of you in the midst of a painful experience that should be personal and discreet?"

And yet: That's what the Unfollow button is for. As Ryan pointed out, "if you think it's gross or an overshare, ya don't have to look at it." The thing about social media is that it's just as easy to opt out as it is to opt in. Those who think Teigen may be using her miscarriage to generate publicity also likely believe she uses everything in her life to generate publicity. Even if that's true, guess what? You don't have to pay attention if you don't want to.

At the very least, Teigen's choice to share the event, in fairly intimate detail, with no less than the world is -- we can all agree -- very modern. And it is at once brave and discomfiting. Miscarriage is often stigmatized, uncomfortable to talk about and uncomfortable to hear about, and as such encourages many women not to talk about it at all. This, in turn, leads them to feel ashamed -- as if their bodies were failures -- and alone. Like anything, the more we talk about it, the more normal it becomes and the less shame is attached, and the easier it will be for women and their families to find and offer support.

At the same time, Teigen has become known for her forthrightness on all topics, which admittedly detracts from the notion of this particular share being the brave and noble choice. After posting earlier this week that she had been admitted to the hospital for bleeding, she basically left herself no choice but to let followers know what came of it. This is the danger of sharing your life on social media -- it's hard to pick and choose what to reveal.

I can't see how Teigen's share -- even if it was an overshare -- might hurt anyone. But if it helped her, or anyone else grieving the loss of a baby, or a dream -- or may in the future -- then this is one social media overshare that I think most of us can agree deserves every bit of attention it's getting.

The dress, the tux, the rules -- reactions to new NYS prom guidelines