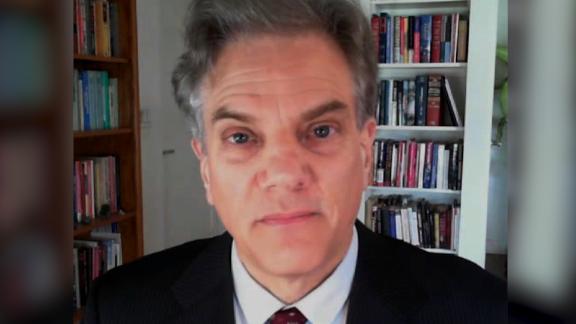 The Supreme Court rejected a Democratic attempt to allow Wisconsin mail-in votes, that were postmarked by election day, to be received up to six days after the election. Law professor Richard Pildes discusses the ruling and Justice Brett Kavanaugh's concurring opinion.

On Monday, the Supreme Court issued a ruling prohibiting Wisconsin from counting mail-in ballots that arrive after Election Day. In a concurring opinion, Justice Brett Kavanaugh raised troubling concerns about whether he'll be independent of the man who named him to the court.

Kavanaugh wrote, "If the apparent winner the morning after the election ends up losing due to late-arriving ballots, charges of a rigged election could explode."

(Kavanaugh quotes from a law review article by Professor Richard Pildes, a current CNN Contributor, whose words were actually in support of extending mail-in ballot deadlines; it is one thing for a professor to theorize in a scholarly piece, and quite another for a justice to take that language out of context and to use it in a decision of the Supreme Court).

Kavanaugh's statement is baldly political and potentially dangerous. First, Kavanaugh adopts and eagerly amplifies Trump's ongoing effort to cast doubt on the legitimacy of mail-in ballots, despite the complete lack of evidence of significant fraud. Trump has pushed publicly for ballots counted after November 3 to be discarded -- contrary to many states' laws -- tweeting on Monday, "Big problems and discrepancies with Mail In Ballots all over the USA. Must have final total on November 3rd."Senate Majority Leader Mitch McConnell similarly tweeted in September that "the winner of the November 3rd election will be inaugurated on January 20th." McConnell's phrasing -- "the November 3rd election" -- conspicuously excluded any mail-in ballots counted afterwards.

And Kavanaugh's opinion could stoke potentially dangerous public reactions if the election should end up disputed. As a Supreme Court justice, Kavanaugh certainly knows to choose his words carefully. Yet, he writes that "If the apparent winner the morning after the election ends up losing due to late-arriving ballots, charges of a rigged election could explode," provocatively using a phrase recently used by Trump himself to incite fear of election fraud. Given the possibility for civic unrest, Kavanaugh's language here is wildly irresponsible.

More broadly, if the Supreme Court wants to retain any shred of institutional legitimacy, the justices need to start deciding election-related cases based on law, not politics. Over just the past few days, we have seen both ideological wings of the Supreme Court, conservative and liberal, essentially flip-flop their legal principles to engineer results that maximize electoral advantage for their preferred political parties.

Last week, the United States Supreme Court declined to block a Pennsylvania Supreme Court ruling permitting state officials to count mail-in ballots received up to three days after Election Day. The Court's three liberal justices (Stephen Breyer, Sonia Sotomayor, and Elena Kagan), joined by Chief Justice John Roberts, opposed intervention, leaving it to the state to determine their own manner of voting. The Court's four conservatives (Clarence Thomas, Samuel Alito, Neil Gorsuch, and Brett Kavanaugh) dissented, voting in favor of stepping in and potentially overruling Pennsylvania's own determination on how to count its ballots. (This was before Amy Coney Barrett was confirmed and sworn in as the newest justice; the 4-4 vote meant the case reverted to the lower court's ruling).

Then, on Monday, the Supreme Court did a near-complete 180.This time, the case involved a Court of Appeals ruling allowing Wisconsin to stop counting mail-in ballots received after Election Day. This time, the conservatives -- the same four justices who wanted to intervene in Pennsylvania's voting process last week -- plus Roberts ruled that the Supreme Court should not get mixed up in a state's handling of its own election.

Justice Gorsuch wrote in the Wisconsin case that "state legislatures — not federal judges, not state judges, not state governors, not other state officials — bear primary responsibility for setting election rules." Fine -- but Gorsuch apparently felt the exact opposite last week about Pennsylvania. The three liberal justices also flipped positions. Last week, they were hands-off in Pennsylvania, but this week they wanted to intervene in Wisconsin. Roberts deserves credit; he is the only justice on the court who has been consistent in application of legal principles, regardless of likely electoral outcome.

If you're confused, it's not you; it's the Supreme Court. There's only one consistent principle emerging, and it's electoral, not legal: if the state has allowed more access to voting, the liberals want to leave it be and the conservatives want to intervene. And if the state has restricted ballot counting, the conservatives are all for it and the liberals object. That's not law -- it's politics.

Things aren't likely to get any better for the liberal bloc, and they could get far worse with Justice Barrett joining the Supreme Court bench, giving the conservative voting bloc a 6-3 majority. So, it will take two crossovers -- Roberts perhaps, plus another -- for the liberals to carry a decision.

The stakes here could hardly be higher. Both Pennsylvania and Wisconsin were decided by razor-slim margins in 2016, and both promise to be among the most vital swing states in 2020. And even in the few days remaining until November 3, the Supreme Court could rule on a voting case coming from North Carolina, and on the Republican Party's last-gasp effort to obtain a favorable ruling (again) in Pennsylvania.

Watch the Supreme Court carefully over the next few days. The justices will reveal whether they are true jurists, or just partisans in robes.

Carl (Virginia): How do Amy Coney Barrett's legal qualifications measure up against other Supreme Court justices, and are there any legal requirements to become a justice?

Barrett has served as a federal appellate judge for three years, since her confirmation in October 2017. Before that, she was a law professor and practiced briefly in the private sector.

Looking strictly at prior judicial experience, Barrett ranks sixth out of nine justices on the Court. Five justices -- Breyer, Alito, Sotomayor, Gorsuch, and Kavanaugh -- served for at least a decade as judges before joining the Court. Two, Roberts and Thomas, were judges before joining the Court, but for less than Barrett's three years. And Kagan had never been a judge before becoming a Supreme Court justice (though she had served as United States Solicitor General and had been the Dean of Harvard Law School).

Jack (Maine): Can Congress get around lifetime appointments by shrinking the size of the Supreme Court?

But here's the problem: the Constitution provides that federal judges serve "during good behavior," meaning for lifetime terms (or until they resign or are impeached). So, it would be difficult or impossible to remove a sitting Justice from the Supreme Court. The best (and perhaps only) way for Congress to reduce the Court would be to pass a law specifying that the next two (or whatever number Congress sets) Supreme Court vacancies will remain unfilled until the Court is reduced in size to the targeted number.