A day of cowbells, car horns, hugs and cheers 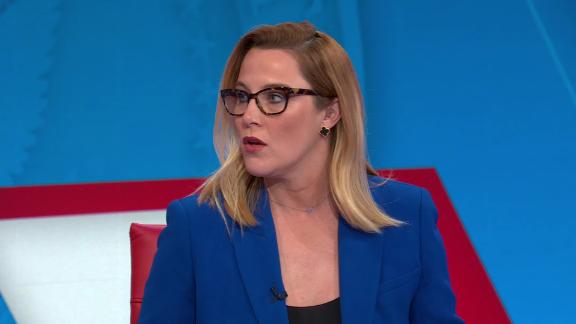 CNN's SE Cupp tells Don Lemon why it's so important to her to see Kamala Harris in a position of power.

Those were just a few of the dozens of texts I received this morning when Joe Biden was elected 46th president of the United States.

Believe it or not, I don't talk politics with most of my friends and family. For one, as a conservative who's been surrounded by liberals for most of my life, it's perilous and can complicate relationships. For another, when you do politics for a living, it's not always something you want to talk about when you're off the clock.

So, when I heard from friends with whom I rarely talked politics, the silent, unspoken pact we'd made was broken. And I could feel in their words the palpable, collective relief of so many Americans that the angry, exhausting, anxiety-inducing era of Trump will finally end.

It was as if the valve on a pressure gauge had been opened up after four years of pent-up fury and frenzy. The relief was both for the fate of the country -- which has been at its boiling point for months with a deadly pandemic, economic stress, and social and racial unrest -- and for our families, as we anticipate a return to some semblance of normality, a new day of some rational sort where the president of the United States no longer pits Americans against each other for sport.

The hate, the gaslighting, the constant tweets, the corruption, the distractions, the rank incompetence, the racism and bigotry, the sexism and misogyny -- it's taken a toll on our psyches. Whatever your politics, we need a break, we need to heal, we need to recover from this.

That sense of relief today was everywhere. It was literally in the air. In cities all over the country there was dancing -- actual dancing -- in the streets. In New York people honked car horns for joy, they stopped what they were doing to cheer and hug each other, and sprayed champagne on the sidewalks.

In Connecticut, where I live, women of color celebrated Sen. Kamala Harris's historic achievement, becoming the first woman and woman of color to assume the vice presidency.

In Philadelphia there were fireworks, cowbells and marching. One emergency room doctor came out in scrubs before his shift to celebrate, expressing hope that Biden will "listen to the doctors" on the coronavirus that has kept him from his family for 10 months.

Mexican asylum seekers in a Brownsville, Texas, detention facility shouted for joy. "We're all going to celebrate today," said one.

Even across the ocean, there was celebration. In London, fireworks. In Paris, church bells.

The Trump presidency has been so destructive to democracy and the institutions it requires to work, from free elections to a free press. But just as bad is the stress it's had on our psyches. It's hard to imagine another presidency that's been this psychologically destructive for so many -- for women, people of color, immigrants, refugees, Jews, the LGBTQ community, for people who care about justice and decency -- and today we finally get the relief we deeply need.

There is so much work to do, and so much healing to achieve. But at least, at last, it feels like we can breathe again.