A woman is suing Hilton for $100M, claiming she was secretly filmed in the shower and blackmailed 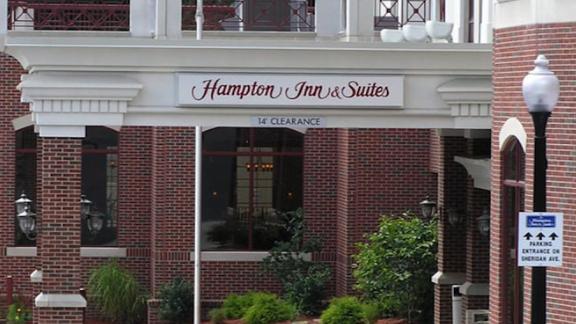 A woman is suing Hilton Worldwide after she says she was filmed in a hotel shower without her knowledge at a Hampton Inn and Suites in Albany, New York.

A woman has filed a $100 million lawsuit against Hilton Worldwide, claiming a hotel employee secretly recorded her while she was naked in the shower and tried to blackmail her after posting the video to more than a dozen pornographic websites.

The Chicago woman, identified in court documents only as "Jane Doe," had just graduated from law school in 2015 and was staying at a Hampton Inn and Suites in Albany, New York, to take the New York bar exam when she was recorded by a hidden camera in her room's bathroom, a lawsuit says.

"When you enter a hotel room, you have an expectation of privacy and safety. In my case, both of these things were stolen from me. What happened to me is an incredible violation and should be treated as a sex crime," the woman said in a statement through her attorney.

She wasn't aware that she had been recorded until September when the footage was uploaded to a pornographic website with her full name and she began receiving emails from someone demanding more images of her, according to the lawsuit.

"Promise me my own show. That's the hottest. No need to show your face. Then I disappear and remove the video forever before they get copied on every website," one email stated, according to the suit.

The unidentified sender knew where she attended school, her workplace and that she had taken the bar exam, the lawsuit says.

After the woman didn't respond to the threats, the video was posted to more pornographic sites and a week later, the video was sent to her friends, colleagues and former classmates, the suit states.

The person then demanded $2,000 immediately and $1,000 per month for a year to make them stop, according to the suit filed last week.

The woman did not give in to the demands, and she says the video is still regularly posted to pornographic websites with her full name.

The woman is suing the owner of the Albany hotel as well as Hilton Worldwide, the chain's parent company. She believes the person who emailed her was an employee who could have gotten her name, contact information and more personal information from the hotel database, the suit says.

A spokesperson for Hilton Hotels said the company became aware of the allegations Monday.

"We take the safety and well-being of our guests incredibly seriously, and find the details included in the civil filing distressing," the Hilton spokesperson said in a statement.

In the suit, the woman and her attorney said they have since learned of others who were filmed in the hotel room and became aware of the recordings in a similar way.

A statement from the Albany Hampton Inn where the alleged recording was made said hotel management was "shocked and stunned" over the allegations raised in the suit, stressing guest security is the hotel's top priority.

"Thus far, no evidence of any kind has been found during our initial review of the situation," the statement said, adding that no recording devices were discovered during a recent renovation.

"This lawsuit is a wake up call," said the woman's attorney, Roland Christensen. "Hoteliers need to recognize the threat of digital voyeurism, and they need to institute policies to protect their guests from such a heinous violation."

Christensen said the woman has reported the videos to police. However, Albany police spokesman Steve Smith said the department first became aware of the case Tuesday due to media calls. No reports have been made locally, Smith said, and the department has not had any inquiries from state or federal law enforcement agencies.

2 inmates at Marcy Correctional Facility in isolation with coronavirus, others quarantined

Sen. Seward and his wife test positive for coronavirus, say cases are mild

Coronavirus symptoms: A list and when to seek help