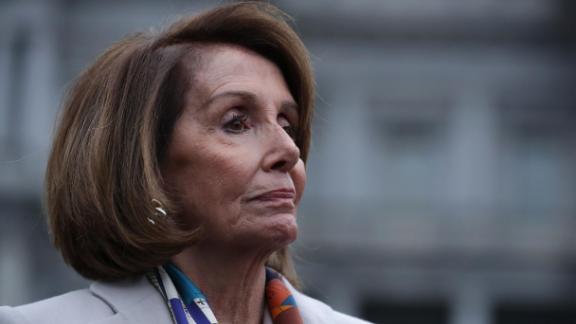 Rep. Nancy Pelosi, poised to be the next house speaker, says it is open for discussion as to whether a sitting president can be indicted. CNN's John Berman has more.

Nancy Pelosi, who is poised to be the next House speaker, said that it remains open for discussion whether the Justice Department could indict a sitting president.

Ahead of the new Democratic majority taking control of the House on Thursday, the California Democratic representative was asked whether special counsel Robert Mueller should honor the Department of Justice's opinion that a sitting US president should not be indicted. Mueller is currently investigating Russian interference in the 2016 election and possible connections between President Donald Trump's campaign and the Kremlin.

'I do not think that that is conclusive. No, I do not,' Pelosi said in an interview with NBC anchor Savannah Guthrie that aired Thursday on 'Today.'

Asked if Mueller could legally indict a sitting president, Pelosi said: 'Let's just see what Mueller does. Let's spend our time on getting results for the American people.'

The Office of Legal Counsel's guidance, issued in 2000, says, 'The indictment or criminal prosecution of a sitting President would unconstitutionally undermine the capacity of the executive branch to perform its constitutionally assigned functions.'

'It's not the law,' Pelosi told Guthrie. 'Everything indicates that a president can be indicted after he is no longer president of the United States.'

Guthrie asked, 'What about a sitting president?'

'Well, a sitting president when he is no longer president of the United States,' Pelosi answered.

Guthrie pressed again, asking, 'A president who's in office? Could Robert Mueller come back and say, 'I am seeking an indictment?''

She also did not rule out impeachment proceedings against Trump.

For the first time since he took office, Trump will be faced with a new opposition in the House from Democrats, who plan to scrutinize the President and use their subpoena power.

The Mueller investigation, which began in 2017, could issue its final report this year, making referrals or recommendations to the US House.

Trump lawyer Rudy Giuliani told CNN in May that Mueller's team had informed Trump's lawyers that it has concluded a sitting president cannot be indicted.

Trump's former attorney, Michael Cohen, said in court in August that Trump directed him to make payments during the 2016 election to silence women who claimed they had had affairs with the future President. Cohen pleaded guilty to two campaign finance violations related to those payments to adult film star Stormy Daniels and former Playboy model Karen McDougal.

Prosecutors have said that in executing the payments, Cohen 'acted in coordination with and at the direction of' Trump, who has denied having the affairs with the two women.

Trump often derides the Mueller investigation as a 'witch hunt' and denies any collusion between his campaign and Russia to sway the 2016 election in his favor.

State police: Man claims he was stopped on Route 49 by police impersonators

The price of wine is dropping fast