12 horses have died at New York state racetracks in July 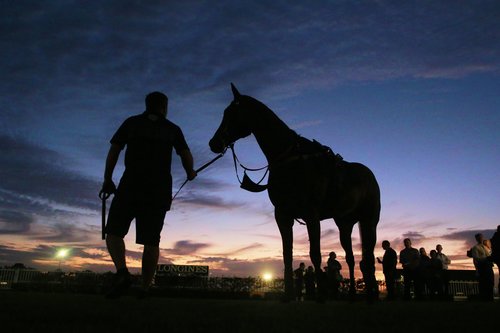 Twelve horses have died at New York state racetracks in the month of July, the New York database on Equine Deaths shows. Eleven of those deaths occurred with...

Twelve horses have died at New York state racetracks in the month of July, the New York database on Equine Deaths shows. Eleven of those deaths occurred within 10 days -- from July 8 to July 18.

Five horses died at the Saratoga Racecourse, four at the Finger Lakes Racetrack, two at Monticello Raceway and another at Belmont Park. Some of the deaths are attributed to euthanasia.

In comparison, last July there were a total of nine race horse deaths in the state.

So far this year, there have been 51 horse deaths among the state's racetracks, according to the database.

Earlier this year, the New York Racing Association (NYRA) reiterated safety initiatives across all of the association's racetracks -- which include the Saratoga Racecourse and Belmont Park -- that have been in place for about six years.

Those including testing of racing and training surfaces before and throughout each race, alarm systems used to alert of a loose horse and upgrades to turf courses with "modernized irrigation and drainage systems."

"NYRA has consistently shown a commitment to implement science-driven best practices to establish and maintain safe surfaces and facilities for its equine and human athletes," the association said in a statement.

NYRA also said two years ago it was taking steps to reduce racehorse deaths by implementing a number of additional actions to its "existing industry-leading equine health and safety policies and procedures."

Those actions included having more vets on duty during training hours, "state-of-the-art monitoring of horses and comprehensive trainer education intended to share scientific findings of research into the types of injuries that occur at New York Thoroughbred racetracks and risk and protective factors that can help to prevent injury."

Horse deaths across the country

New York is not the only state dealing with a higher-than-normal number of race horse deaths.

A string of deaths in California's Santa Anita Park earlier this year had activists calling for the track to suspend racing.

PETA called for a shutdown of the track and its senior vice president, Kathy Guillermo, suggested Santa Anita replace the dirt track with a safer synthetic surface, put in place imaging technology capable of detecting pre-existing conditions in horses' legs and allow the Los Angeles County District Attorney's office to finish investigating the death before the track reopens.

California Gov. Gavin Newsom said in June he was "troubled" by the deaths at the track.

Data from the California Horse Racing Board shows that in past years, the numbers were much higher. Fifty-four horses died in 2017 at Santa Anita and 57 died the year before that.