An 8-hour standoff ended with 6 Philadelphia officers shot. An attorney told the suspect to surrender 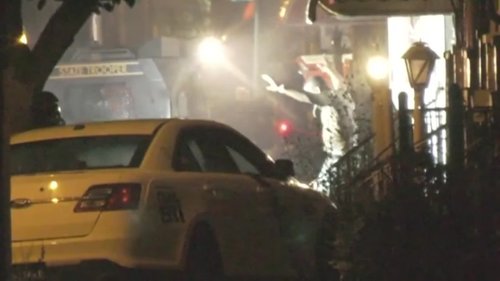 For hours, bullets flew and gunpowder wafted through the streets of North Philadelphia.

Police officers trying to serve a narcotics warrant entered a row house in the Nicetown-Tioga neighborhood Wednesday afternoon. As they got toward the kitchen area, a man fired multiple rounds, forcing some officers to escape through the window, authorities said.

But others got trapped in the house with the gunman after he barricaded himself. As he traded gunfire with police outside, bullets ricocheted on the pavement, sending officers crouching behind police cars.

Six officers were wounded by the time the suspect surrendered outside almost eight hours later.

'We do know this guy came actually outside with a gun ... so this could have been even more dangerous and volatile if not for the professionalism of SWAT' officers, Philadelphia Police Commissioner Richard Ross said.

Mayor Jim Kenney said he's thankful no lives were lost, but is 'a little angry about someone having all that weaponry and all that firepower.'

'But we'll get to that another day,' the mayor said. 'It's about the officers and their families right now.'

The six officers shot have been released from a hospital, police said.

The suspect called an attorney for help during the standoff

Ross identified the suspect as Maurice Hill. The police chief praised an attorney who had worked with Hill for helping end the standoff.

'I gave his attorney, Shaka Johnson, a lot of credit that he came and he was able to certainly engage him in conversation much longer,' Ross said.

Johnson told CNN affiliate KYW that he is Hill's former attorney, and that he received a call from Hill at about 8:30 p.m. Wednesday while he was watching the drama unfold on TV.

Johnson said the suspect told him he needed help.

'I realized who it was. The game for me became getting him out of there safely,' Johnson told KYW.

'He did not want this to end violently. ... I told him you got to surrender now.'

Authorities had to use tear gas to get the suspect out of the house, the police chief said. And because tear gas was still wafting in the air Thursday morning, investigators haven't been able to go inside the home.

'It will be active scene for a number of hours,' Ross said.

The shooting started about 4:30 p.m. after officers entered the home. More than three hours after the first shots, the suspect showed no signs of surrendering, police said.

Concern grew for two officers trapped in the house with the gunman as police cars and officers in tactical gear swarmed the neighborhood.

'We've got a pretty horrible situation unfolding, and you hear me say unfolding because it is not resolved,' the police chief said at the time.

Negotiators tried to communicate with the suspect, but he was picking up the phone and not responding, Ross said. The suspect's attorney eventually joined a phone call to reassure him police won't harm him, authorities said.

At one point during the standoff, the suspect spoke with his girlfriend via video chat, the police commissioner said.

Ross did not detail how officers learned about the chat between Hill and his girlfriend.

'I do know there was a point when we know he was FaceTiming his girlfriend, and that's how we ended up with the information about her and largely about his newborn, which obviously we're leveraging that to try to appeal to him and his sense of reasoning.'

As the sun set and the standoff dragged on, the mayor said he was listening to police radio transmissions. Officers in the house were whispering because they didn't want the shooter to hear them, he said.

Five hours after the standoff started, a SWAT team rescued two officers and three others trapped inside the row house, the police commissioner said. CNN affiliate KYW reported the officers were trapped on the second floor while the shooter was on the first floor.

'They were able to use stealth to do it,' the mayor said. He said the shooter appeared unaware of the rescue mission.

'It's disgusting' how many bullets and weapons the suspect has

Shortly after midnight, police announced the suspect had been arrested.

'I am surprised that he came out,' the police chief said. He said the suspect told him on the phone during the standoff that he had an 'extensive' criminal history, but the chief would comment on specifics about his criminal background.

Ross said the suspect had 'some kind of .380' weapon on him when he was arrested.

The Philadelphia mayor called out the National Rifle Association and demanded a resolution to the nation's gun crisis, saying officers need help keeping guns out of criminals' hands.

'This government, both on federal and state level, don't want to do anything about getting these guns off the streets and getting them out of the hands of criminals.'

Videos often contradict what police say in reports. Here's why some officers continue to lie