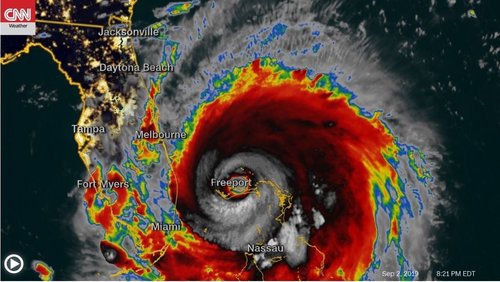 Hurricane Dorian is barely moving as it continues to lash Grand Bahama Island with fierce winds.As it lingers over t...

Hurricane Dorian is barely moving as it continues to lash Grand Bahama Island with fierce winds.

As it lingers over the Bahamas -- just 100 miles away from West Palm Beach, Florida -- the storm is carving a path of devastation: knocking homes to the ground and claiming the lives of at least five people since the weekend, among them an 8-year-old boy.

Bahamian Prime Minister Hubert Minnis said many homes, businesses and other buildings have been destroyed or heavily damaged, calling the devastation 'unprecedented and extensive.'

Dorian -- now a Category 3 storm with maximum sustained winds of 120 mph -- has been crawling over the northern Bahamas, whipping the same areas over and over again since Sunday, when it moved over the Abacos Islands as a Category 5 storm.

By 8 a.m. ET Tuesday, the storm finally was inching to the northwest after remaining basically stationary for hours just off Grand Bahama Island, whipping it with its eyewall. By the time the storm moves away, parts of the Bahamas will have received more than 30 inches of rain, forecasters said.

The storm is expected to head slowly north later Tuesday morning, forecasters said. Dorian is forecast to approach Florida Tuesday night through Wednesday evening, pass very near the Georgia and South Carolina coasts Wednesday night and Thursday and then roll 'near or over' the North Carolina coast late Thursday, the National Hurricane Center said.

Dorian no longer is expected to make landfall in Florida, but coastal residents there will still feel its impact, CNN meteorologist Robert Shackelford said.

'Widespread tropical storm force gusts, heavy rain and heavy storm surge are still in the forecast for the Florida coast for the next couple of days,' all of which can lead to power outages, flooding and other disasters, Shackelford said.

Rains capable of flooding regions of the US Southeast and lower mid-Atlantic will continue through Friday, with parts of Florida's and Georgia's Atlantic coasts set to receive 3 to 9 inches of rain, the weather service said.

Severe flooding and devastation on the Abaco Islands and Grand Bahama

Video and witness accounts from the Abacos and Grand Bahama reveal utter devastation there: Buildings ripped apart and flooded, boats pushed ashore or sunk, and cars carried away by rushing floodwater.

On Man-O-War Cay, Gina Albury and 11 other people -- including her husband and four children -- were sheltered Tuesday in what's left of a church, with no electricity. The top floor was destroyed -- as were Albury's home and many other buildings on the island, said Albury's sister, Kate Racer-Russell.

'All the boats in the harbor in Man-O-War Cay (sank), including all the ferry boats,' said Racer-Russell, who lives in Florida and was relaying Albury's account to CNN. 'Only two people have a (satellite) phone on that cay, and that's the only reason why I know my sister and her family are alive and well.'

The family intended to leave before the storm, but their boat engine failed. Racer-Russell said she's heard that helicopter crews intend to deliver supplies to the cay Thursday or Friday.

'I hope they can hold out,' Racer-Russell said.

Racer-Russell also has other relatives taking shelter in Marsh Harbour, a badly flooded city on Great Abaco. Her husband's brothers were staying in an attic, because the ground floor was inundated, she said Tuesday.

One of her brothers-in-law, Bryce Russell, sent a photo showing his truck nearly submerged, with only the top showing.

One resident from Marsh Harbour told CNN he saw people walking in waist-deep waters and saw a house that had flipped over.

Dorian kills at least 5 in the Abaco Islands

McIntosh's 31-year-old daughter found the boy's body, she told the Bahamas' Eyewitness News. She says her granddaughter is also missing.

'I just saw my grandson about two days ago,' McIntosh said. 'He told me he loved me. He was going back to Abaco, he turned around and said, 'Grandma, I love you.''

Bahamian officials said Monday it was still difficult to assess the number of casualties amid the dire conditions.

'It's not safe to go outdoors,' Bahamian Foreign Affairs Minister Darren Henfield said. 'Power lines are down. Lamp posts are down. Trees are across the street. It is very dangerous to be outdoors.'

Minnis, the prime minister, said Monday night he knew 'that there are a number of people in serious distress.'

'We pray for their safety and will provide relief and assistance as soon as possible,' he said.

Minnis said initial reports from Abaco suggest 'the devastation is unprecedented and extensive.'

US Coast Guard helicopter crews flew to the Abaco Islands on Monday, picking up 19 patients from a Marsh Harbour clinic and evacuating them to Nassau for further treatment, Coast Guard Rear Adm. Eric Jones told CNN on Tuesday. The crews also dropped off a doctor and several medics at Marsh Harbour.

Three Coast Guard cutters were preparing Tuesday to go to the affected islands to provide more help once the seas calmed down, Jones said.

US prepares for storm

Millions across Florida, Georgia and the Carolinas are under hurricane and tropical storm alerts.

In Florida, where the hurricane's outer bands have already arrived, 17 counties are under evacuation orders.

A 68-year-old man in the state died while preparing for the storm.

Bradley was on a small ladder trying to cover up the windows to his home Sunday afternoon. His wife was inside at the moment of the incident and ran outside when she heard the crash. By the time police got there, it was too late, Connor said.

In Indian River County, authorities said they were concerned about residents refusing to leave. If those people encounter an emergency, first responders won't be able to help if the storm gets too strong, Maj. Eric Flowers said.

'It's going to be difficult for us to get out to the barrier islands after the storm. ... This is a slow-moving storm, so we're concerned that those folks might get isolated out there for a time until Dorian actually passes and it's safe for our first responders to get out there to them,' Martin County Emergency Management Director Michele Jones.

Nearly 1,100 flights going in and out of Florida had been canceled by early Tuesday, data from Flightaware.com showed.

In Georgia, Gov. Brian Kemp issued evacuation orders for 12 counties, urging residents to get out.

'This storm remains a critical threat to Georgia,' Kemp said, according to CNN affiliate WSB. 'This storm is not moving. It's massive. I would not take any chances. It's not worth the risk of riding it out.'

The Easter Bunny stops by the Melrose Supermarket