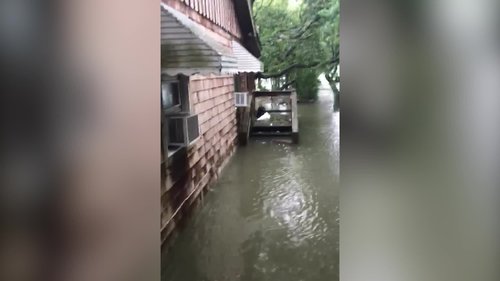 Hundreds of people could still be on North Carolina's Outer Banks as Hurricane Dorian smacks into and floods the barrier islands Friday morning, a state offi...

Hundreds of people could still be on North Carolina's Outer Banks as Hurricane Dorian smacks into and floods the barrier islands Friday morning, a state official said.

The Category 1 storm made landfall over Cape Hatteras at 8:35 a.m. ET with maximum sustained winds near 90 mph, causing flooding in parts of Hatteras and nearby Ocracoke.

No injuries there were immediately reported, Sprayberry said. The state had ordered evacuations of the Outer Banks this week, but officials have received reports that hundreds of people stayed, he said.

On nearby Ocracoke Island, feet-high floodwaters had taken over the yard outside Deborah Lacks' home Friday morning. Video that she shared to Twitter showed the water lapping up against the house and vehicles parked outside.

Flooding is at 'historic levels' on that island, the Dare County emergency management office said.

Friday should be the last day Dorian inflicts serious damage in the United States, after it devastated the northern Bahamas and pounded parts of the US southeast coast.

As of 11 a.m. ET, Dorian's eye was over the Atlantic, off North Carolina's coast, moving northeast. It eventually will deliver rain and tropical-storm-force winds in the mid-Atlantic states later Friday and extreme southeastern Massachusetts late Friday or early Saturday, the hurricane center said.

Since Thursday, Dorian has flooded parts of the Carolinas and spawned a number of tornadoes, as well as lashed Virginia with winds and rain. More than 415,000 people were without electricity service Friday morning in South Carolina, North Carolina and Virginia, according to poweroutage.us.

Parts of North Carolina may receive up to 8 more inches of rain Friday, for two-day totals up to 15 inches, forecasters said.

Earlier in the week, Dorian flattened homes and wiped out neighborhoods in the Bahamas, leaving at least 30 people dead. It then closed in on the southeastern coast of the United States, where five deaths have been blamed on the storm so far.

'Dorian has North Carolina in its sights,' Gov. Roy Cooper said Thursday. 'We need people to hunker down and stay safe. We don't need people leaving their homes.'

A series of watches and warnings

A hurricane warning was in effect late Friday morning from Bogue Inlet, North Carolina, to the North Carolina/Virginia state line.

Thursday, nearly two dozen tornadoes were reported from the outer bands of Dorian. They toppled mobile homes and left debris strewn for acres.

Tornadoes are common in the thunderstorm bands of hurricanes and tropical storms.

Tornadoes along the coast

North Carolina resident Byron Cox was in his mobile home in Emerald Isle when the tornado approached Thursday. His home was still standing, but his father's was destroyed, he saidy.

'All of a sudden I didn't feel it (any) more. I looked outside, and the tornado ... (was) going through the back. ... Debris flying everywhere. Never saw anything like this in my entire life.'

The tornadoes extended into South Carolina, where firefighters say one damaged an unspecified number of vehicles and buildings in North Myrtle Beach.

Wayne White captured video of the funnel cloud there. He said he was checking on some properties he manages when he saw it.

'I saw the circular clouds and was going to take a little video, and the funnel came out of nowhere,' he tweeted.

'Yes, today was Dorian Day in Charleston, and I am happy to bid him farewell,' Mayor John Tecklenburg said Thursday. 'To the hundreds of officials, and the outstanding citizens of Charleston, thank you. Tomorrow, we all unite as Team Charleston to recover.'

2 Word of Life defendants set to be released from prison