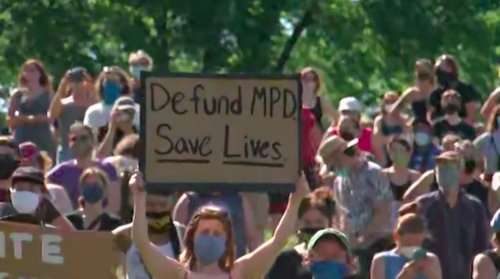 Minneapolis, MN (WCCO) -- On Sunday afternoon, hundreds of people rallied at Powderhorn Park to call for more changes to the Minneapolis Police Department.

Nine out of thirteen Minneapolis City Council members stood up on the stage to announce their intent to disband the city’s police department.

The announcement comes after council president Lisa Bender and member Jeremiah Ellison tweeted Thursday that they plan to dismantle the police department.

“Our commitment is to end our city’s toxic relationship with the police department, to end policing as we know it,” Bender said.

Part of the speakers’ vision for a post-police world included redirecting the MPD budget toward youth programs, mental health services and addiction treatment.

Calling family, neighbors or social workers in times of crisis was also suggested.

Cunningham says revising the city budget later this month due to COVID-19 gives the council an opportunity to explore next steps. He also said they’ll be “hitting 2021’s budget very hard.”

“We’re not going to tomorrow all the sudden have nobody for you to call for help. There will be thoughtful and intentional work that’s done, research engagement, learning that happens in a transition that will happen over time,” Cunningham said.

Leaders with Black Visions Collective spoke about losing hope with the idea of reforming the police department.

“We have had citizen review boards, body cameras and a black chief but we are still here watching black people get murdered and tear gassed in our streets,” Miski Noor said.

Kandace Montgomery, also with Black Visions Collective, said, “We have never looked to the police for our safety. We have looked to each other.”

Cunningham said he didn’t yet know who people would call in an emergency instead of 911.

A complete dismantlement of MPD could be difficult.

The city’s charter requires the council to fund a police force proportionate to population, which comes out to about 723 officers based on recent estimates.

To amend the charter, it’s likely the council would have to put the question to the people in a direct vote during the next election.

MPD and the Police Officers Federation didn’t immediately return our requests for comment.

“I’ll work relentlessly with Chief Arradondo and alongside community toward deep, structural reform and addressing systemic racism in police culture. And we’re ready to dig in and enact more community-led, public safety strategies on behalf of our city. But I do not support abolishing the Minneapolis Police Department.”

On Friday, Minneapolis Mayor Jacob Frey signed a temporary restraining order (TRO) with the state of Minnesota, forcing immediate policing reforms for the Minneapolis Police Department in the wake of George Floyd’s death.

Some of those changes include banning the use of chokeholds by police and requiring officers to report and intervene if excessive force is being used by another officer.

The city’s school district, the University of Minnesota and other agencies, organizations and businesses have severed ties with the department in the past 12 days since 46-year-old George Floyd died while being arrested by four now-former officers. All face criminal charges, and all are in custody.

What you can start planting in your garden right now

Getting ready for liftoff