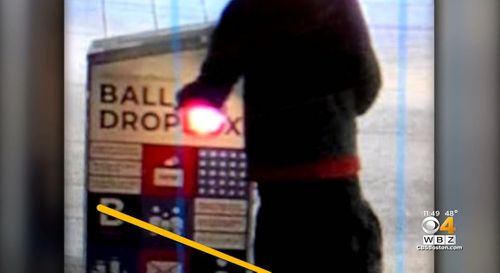 Boston, MA (WBZ) -- U.S. Attorney Andrew Lelling and the FBI have been asked to investigate a fire that was set at a ballot dropbox in Boston’s Copley Square. According to Secretary of State William Galvin, it appears to be a “deliberate attack.”

The fire occurred around 4 a.m. on Sunday.

The dropbox had last been emptied at 2:29 p.m. on Saturday.

According to the Boston Elections Department, there were 122 ballots inside the box when it was emptied Sunday morning. Eighty-seven were legible and able to be processed.

Anyone who used the Copley Square ballot dropbox after 2:30 p.m. Saturday and 4 a.m. Sunday should check their ballot status on TrackMyBallotMA.com. If they are unable to confirm its status, they should contact the Boston Election Department immediately.

Five to ten ballots were damaged to the point that they could not be read at all. Galvin said affected voters will be mailed a replacement ballot and will have the option of casting that replacement ballot or voting in person until 8 p.m. on Election Day. If any affected voter does not submit a new ballot, their original ballot will be hand-counted to the extent possible.

Boston Mayor Marty Walsh and Galvin released a joint statement saying: “What happened in the early hours of this morning to the ballot dropbox in Copley Square is a disgrace to democracy, a disrespect to the voters fulfilling their civic duty, and a crime. Our first and foremost priority is maintaining the integrity of our elections process and ensuring transparency and trust with our voters, and any effort to undermine or tamper with that process must be prosecuted to the fullest extent of the law. We ask voters not to be intimidated by this bad act, and remain committed to making their voices heard in this and every election.”

Galvin directed election officials to increase security around ballot dropboxes. “If it’s necessary to have police officers there we need to deal with that,” Galvin told WBZ-TV. “The integrity of the electoral process we cannot possibly sacrifice.”

In Boston, all boxes are under 24-hour surveillance and emptied daily.

The ballot dropbox in Copley Square was not physically damaged and will still be available to voters.

Boston Police are also investigating the fire and released photos of a suspect.

They said arriving officers found smoke coming out of the box. Fire crews put of the fire by filling the ballot box with water.

“Voters in Massachusetts can feel confident in the success of the information sharing protocols that we have established with our local, state and federal election security partners in advance of the 2020 election, said a statement from Lelling and FBI special agent in charge Joseph Bonavolonta. “We remain fully committed to working with these partners to protect our communities as Americans exercise their right to vote. Help from the public is also vital to our effort. We encourage members of the public to remain vigilant and immediately report any suspicious, election-related activity to us.”

Voters told WBZ-TV it was a sign of the times.

“The country is very divisive right now and it’s happening on both sides,” one man said.

“It’s a little frightening. You’re hearing about things happening all over the country right now, and these stories but everything that I have read and heard from sources that I trust is that mail-in ballots are fine and that it’s a trustworthy, safe way to vote so I feel comfortable doing that,” a woman said.