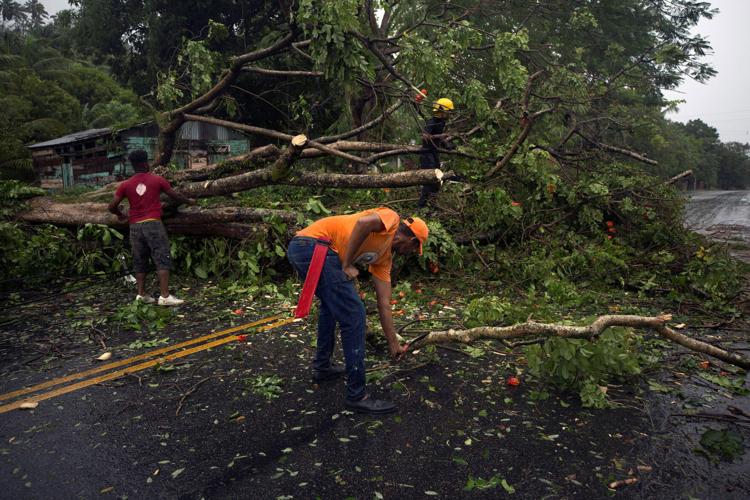 Civil defense personnel and firefighters are pictured here working to remove fallen trees from the highway connecting the provinces of Maria Trinidad Sanchez and Samana, Dominican Republic, on September 19, 2022, after Hurricane Fiona. 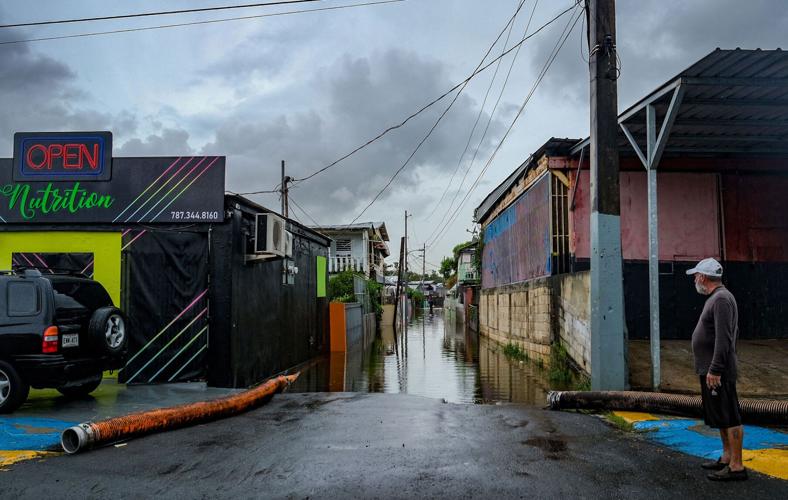 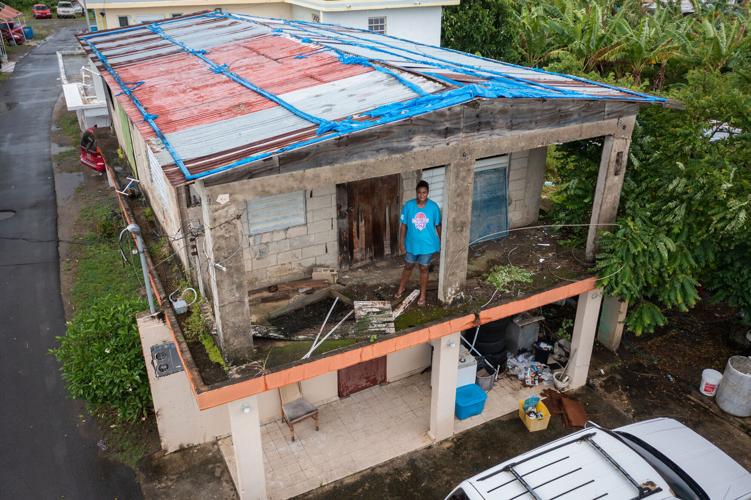 Jetsabel Osorio stands in her house damaged five years ago by Hurricane Maria before the arrival of Tropical Storm Fiona in Loiza, Puerto Rico.

Civil defense personnel and firefighters are pictured here working to remove fallen trees from the highway connecting the provinces of Maria Trinidad Sanchez and Samana, Dominican Republic, on September 19, 2022, after Hurricane Fiona.

Jetsabel Osorio stands in her house damaged five years ago by Hurricane Maria before the arrival of Tropical Storm Fiona in Loiza, Puerto Rico.

Hurricane Fiona is threatening more deadly flooding as it slams the Turks and Caicos islands Tuesday, having already cut power and water service for most of Puerto Rico's 3.1 million residents and left more than 1 million without running water in the Dominican Republic.

Fiona, a Category 3 storm with sustained winds of 115 mph, battered the Turks and Caicos while centered about 40 miles off Grand Turk Island around 11 a.m. ET. Its heavy rains could deliver "life-threatening flooding" through the afternoon in parts of the British territory of about 38,000 people, the Miami-based National Hurricane Center said.

Still dealing with Fiona's ruinous path are the Dominican Republic -- where the storm's outer bands still could cause flooding after it traversed the Caribbean nation Monday -- and Puerto Rico, which Fiona crossed a day earlier, causing a near blackout and leaving damage not seen there since Hurricane Maria made landfall five years ago Tuesday, officials said.

At least four people have died due to the severe weather, including one in the French territory of Guadeloupe, which Fiona slammed late last week; two in Puerto Rico; and one in the Dominican Republic, according to officials.

In Puerto Rico, parts of which will have seen rain totals of more than 30 inches, Fiona pushed rivers to overflow and high water to collect in parts of the territory, flooding homes, streets and fields. Rushing waters wiped away a bridge, carrying its structure downstream, one video shows. Mudslides blocked some roads leading from coastal areas to the interior, a CNN crew saw.

A large portion of the population should have power by late Wednesday, but greater damage in the southern part of the island means restoration will take longer there, the governor said.

More than 1.17 million of the island's roughly 1.47 million utility customers still were without power as of early Tuesday, according to estimates from PowerOutage.us, which notes updated information on restoration efforts is limited.

In Puerto Rico, a 58-year-old man was swept away by a swollen river behind his home in Comerío and another man in his 30s died in a fire accident that occurred while he was trying to put gasoline in his generator while it was turned on, officials said.

Fiona strengthens as it pushes north

Fiona intensified into a Category 3 storm as it moved away from the Dominican Republic's northern coast early Tuesday.

This is the first major hurricane -- Category 3 or higher -- of this year's Atlantic hurricane season.

Heavy rains around the center of Fiona will threaten the Turks and Caicos with "continued life-threatening flooding" through Tuesday afternoon, the hurricane center said.

Those islands could see 4 to 8 inches of rain Tuesday on top of what they received earlier, as well as storm surges -- ocean water pushed onto land -- of 5 to 8 feet, according to the hurricane center.

Hurricane conditions could be seen in Turks and Caicos into Tuesday afternoon, and tropical storm conditions -- winds of at least 39 mph -- were expected to spread over the southeastern Bahamas on Tuesday morning.

Strengthening is expected as Fiona turns from the Turks and Caicos. It could be a Category 4 storm -- with sustained winds of 130 to 156 mph -- by early Wednesday over the Atlantic. It is forecast to pass near or well west of Bermuda late Thursday or early Friday, and could still be at Category 4 when it does, forecasters say.

Over the weekend, Fiona might make landfall in eastern Canada as a hurricane. It is too early to know exactly where or how strong it might be.

Tuesday marks five years since Hurricane Maria's catastrophic landfall in Puerto Rico and some who lived through the 2017 crisis say Fiona's flooding destruction could be even more severe.

Juan Miguel Gonzalez, a business owner in Puerto Rico, told CNN that his neighborhood had still not finished its recovery from Maria when Fiona struck. But this time, he says, the flooding brought even more damage to their homes.

Water service also was interrupted for most, because river flooding affected filtration processes and must recede before safe treatment can resume, officials said. On Tuesday morning, about 60% of customers on the island had no running water, the territory's aqueduct and sewer authority said.

School buildings will be inspected to make sure they are safe for students to return to class in the coming days, the governor said Tuesday.

In addition to the hundreds of Puerto Rican National Guard members aiding in rescue and recovery efforts, the White House said Monday that President Joe Biden told Pierluisi during a phone call that federal support will increase in the coming days.

"As damage assessments are conducted, the President said that number of support personnel will increase substantially," the White House said.

In the Dominican Republic, where up to 20 inches of rain fell in places, emergency workers brought nearly 800 people to safety, the country's emergency management director of operations, Juan Manuel Mendez, said Monday. At least 519 people were taking refuge in the country's 29 shelters Monday, he said.

As of Monday afternoon, at least 1,018,564 customers across the Dominican Republic had no access to running water as 59 aqueducts were out of service and several others were only partially functioning, according to Jose Luis German Mejia, a national emergency management official.

Some in the Dominican Republic were also without electricity Monday as 10 electric circuits went offline, emergency management officials said. It's unclear how many people are impacted by the outages.

There's still time to update party enrollment ahead of primaries