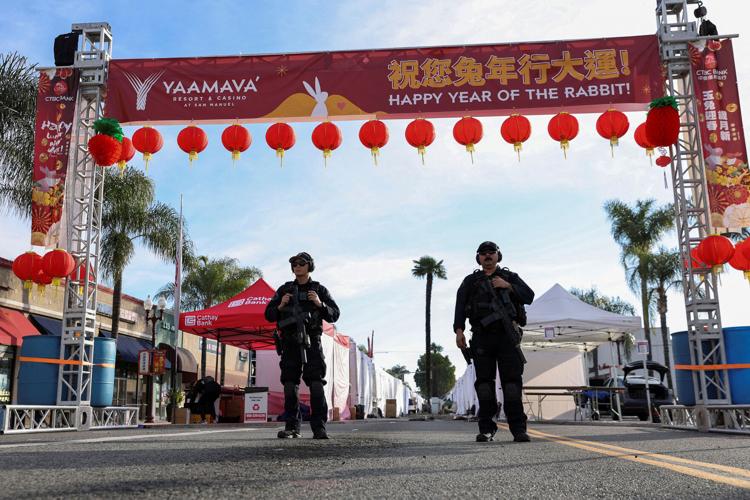 Police officers guard the area near the location of a shooting that took place in Monterey Park. 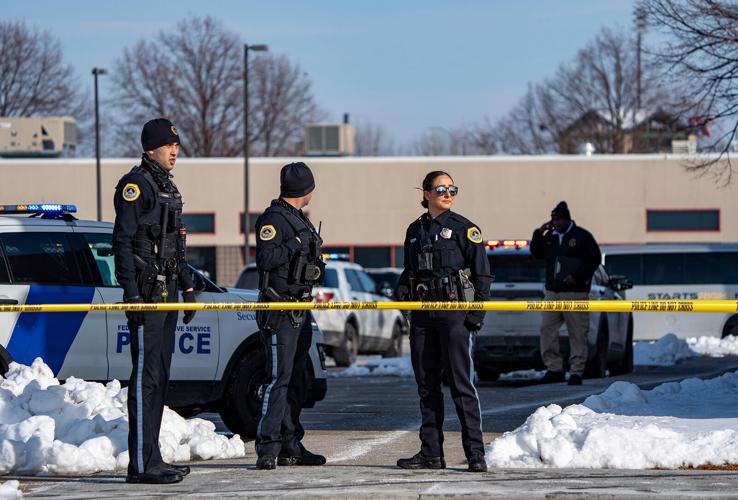 Law enforcement officers stand outside a school housing an educational program after a shooting Monday in Des Moines, Iowa. 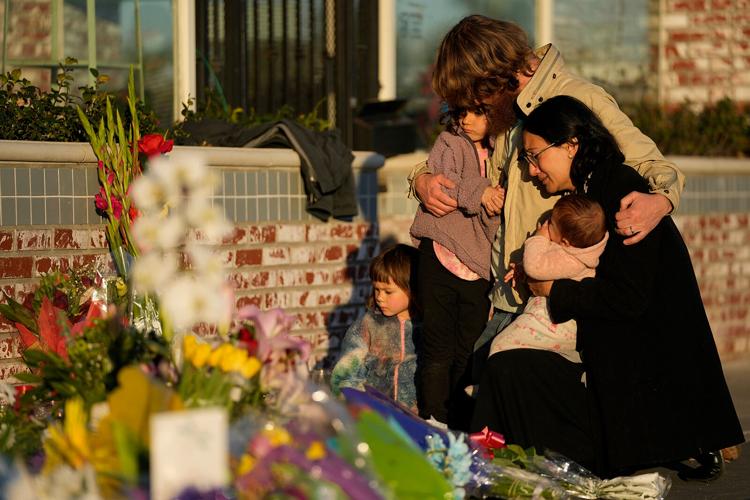 A family gathers at a memorial outside the Star Ballroom Dance Studio Tuesday, in Monterey Park, California. 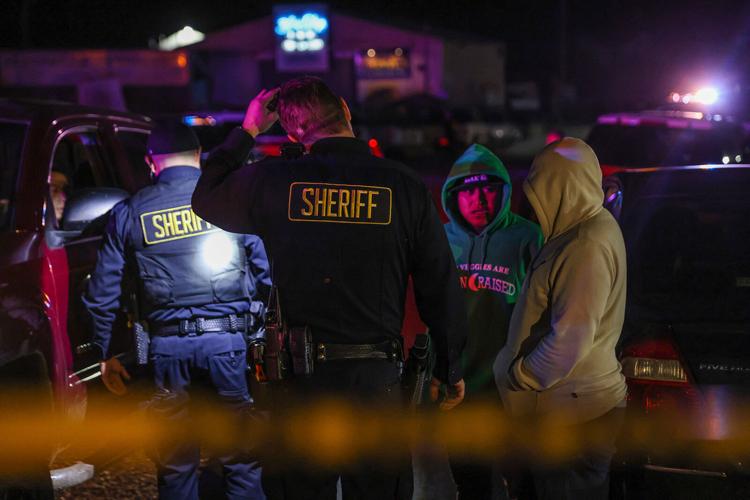 Sheriff's deputies talk with people at the scene of a deadly shooting in Half Moon Bay Monday.

Police officers guard the area near the location of a shooting that took place in Monterey Park.

Law enforcement officers stand outside a school housing an educational program after a shooting Monday in Des Moines, Iowa.

A family gathers at a memorial outside the Star Ballroom Dance Studio Tuesday, in Monterey Park, California.

Sheriff's deputies talk with people at the scene of a deadly shooting in Half Moon Bay Monday.

A series of shootings in three states has made for a heart-wrenching several days, leaving 24 dead as more cities join a growing list of American communities scarred by gun violence.

"Only in America do we see this kind of carnage, this kind of chaos, this kind of disruption of communities and lives and confidence and sense of safety and belonging," California Gov. Gavin Newsom said Tuesday after his state suffered three mass shootings in about 44 hours.

Forty mass shootings have been recorded in the US so far in 2023 -- more than at this point in any year on record, according to the Gun Violence Archive.

Newsom was still visiting victims of Saturday night's Monterey Park shooting that claimed 11 lives when he was told of a second shooting Monday afternoon in Half Moon Bay, which officials later described as an apparent "act of workplace violence" that left seven dead.

"I feared two days ago that Monterey Park would give way to other headlines. Little did I know I'd be up here," Newsom said, speaking from Half Moon Bay. "Meanwhile, the trauma and the damage the devastation is felt for generations in some cases -- communities being torn asunder, no one feeling safe."

The mayor of Monterey Park, still reeling from the attack in his city, gave his condolences to those grieving in Half Moon Bay. "I know what is in store for them in the next few days," Mayor Henry Lo said.

Hours after the Half Moon Bay shooting, five people were shot, including an 18-year-old who died, Monday in Oakland, California.

Then, early Tuesday, a man shot and killed three people at or near a Circle K convenience store in Yakima, Washington, police said.

Those are just some of the communities grieving following recent acts of gun violence, including mass shootings in which four or more people were shot, not including a gunman.

Here are the latest key developments:

• In Half Moon Bay, the suspect was subject to a temporary restraining order after a former coworker and roommate accused him of attacking and threatening him in 2013, court records obtained by CNN show. The 66-year-old suspect, taken into custody Monday, is expected to be arraigned Wednesday, the San Mateo County district attorney's office told CNN.

• In Monterey Park, all 11 people killed were identified. They were all were in their late 50s to mid-70s.

• In Yakima, the suspect was found dead Tuesday of an apparent self-inflicted gunshot wound, according to police.

• In Des Moines, a shooting suspect was arrested and has been charged with murder.

Here are more details of some of the most recent major shootings.

The suspect -- identified as Chunli Zhao -- killed seven people and injured one in a mass shooting Monday, officials said. Four people were shot at a mushroom farm, where the suspect was an employee, and three more were killed at a nearby farm, authorities said.

"All of the evidence we have points to this being the instance of workplace violence," San Mateo County Sheriff Christina Corpus said Tuesday, adding the victims were either Asian or Hispanic.

Zhao was a "coworker or former coworker" of the victims at each shooting site, the sheriff's office said.

The suspect, who was not known to local law enforcement prior to the shooting, owned a semi-automatic weapon that was registered to him, the sheriff told CNN Tuesday.

Investigators served a search warrant at the home of the suspected gunman -- 72-year-old Huu Can Tran -- and found "hundreds of rounds" of ammunition as well as evidence leading officials to believe he was "manufacturing homemade firearm suppressors," Los Angeles County Sheriff Robert Luna said.

The gunman fired 42 rounds from a semi-automatic handgun at the dance hall before heading to a second dance studio in nearby Alhambra, where a civilian charged him and wrestled the gun away from him, Luna said.

Eleven people died and several others were wounded.

Less than a day later, Tran was found dead inside a white van about 30 miles away in Torrance. He died following a self-inflicted gunshot wound, the sheriff said.

The suspect was familiar with the dance hall, but it's unclear whether he knew any of those killed, authorities said.

In Yakima, a man walked into a Circle K early Tuesday and opened fire, killing two people inside, then walked out of the store and shot and killed a third person, Police Chief Matt Murray said.

Police were eventually pointed to the suspect's location Tuesday after getting a call from a woman in Yakima who had lent the suspect her phone and heard him make "several incriminating statements including 'I killed those people,'" Murray said during a news conference.

Police responded and later announced the suspect had died of an apparent self-inflicted gunshot wound.

The motive behind the shooting was being investigated, but Murray said the attack appeared "very much random."

Up to 50 people were out filming a music video when "gunfire broke out from multiple shooters in various directions" on Monday evening in Oakland, the city's acting police chief said.

Officers got an alert via gunshot detection technology and responded to find "some casings" but no victims. They later learned that gunshot victims showed up at several area hospitals, Acting Chief Darren Allison said.

Five people were shot, including an 18-year-old man who died. A driver and passengers were also injured when they crashed while fleeing the scene, Allison said.

It was a "targeted shooting," and investigators are "looking into the possibility of a gang or group connection with this incident," he said.

On Monday afternoon, police and fire personnel in Des Moines responded to a report of a shooting at an educational program for at-risk youth.

They found three shooting victims, who were taken to hospitals. Two students, ages 18 and 16, died, and the program's founder was hospitalized in serious condition, authorities said.

A suspect, Preston Walls, 18, was charged with two counts of first-degree murder, attempted murder and criminal gang participation, police said. CNN hasn't been able to determine if he has a lawyer.

"There's nothing random about this. It was certainly a targeted incident," Des Moines police Sgt. Paul Parizek said of the shooting. "But as far as getting motive, that is something that we are going to try and figure out."

SpaceX, NASA launch 3 astronauts and 1 cosmonaut to the ISS. Here's everything you need to know