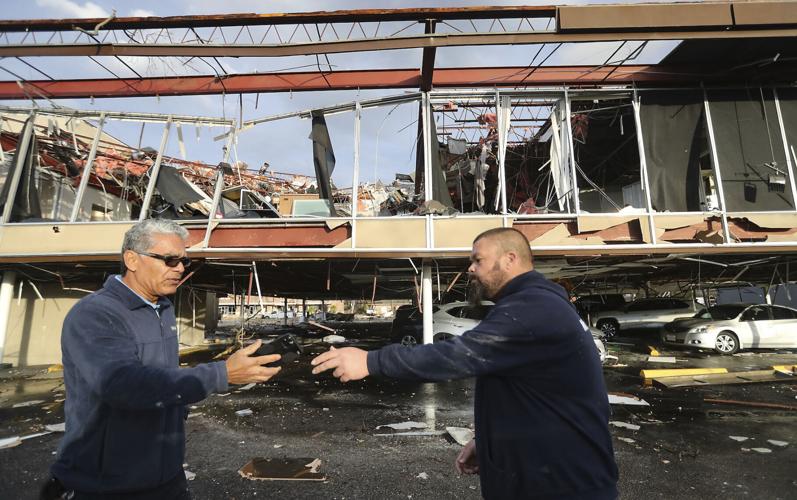 Mr. Electric employees Héctor Vázquéz, left, and Lucas Perry pass off a phone outside their office building where they were working when a powerful storm system hit Tuesday in Deer Park, Texas. 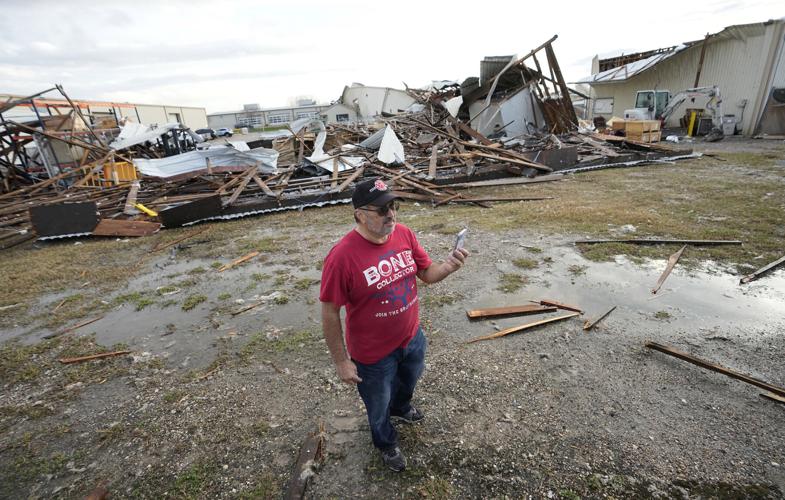 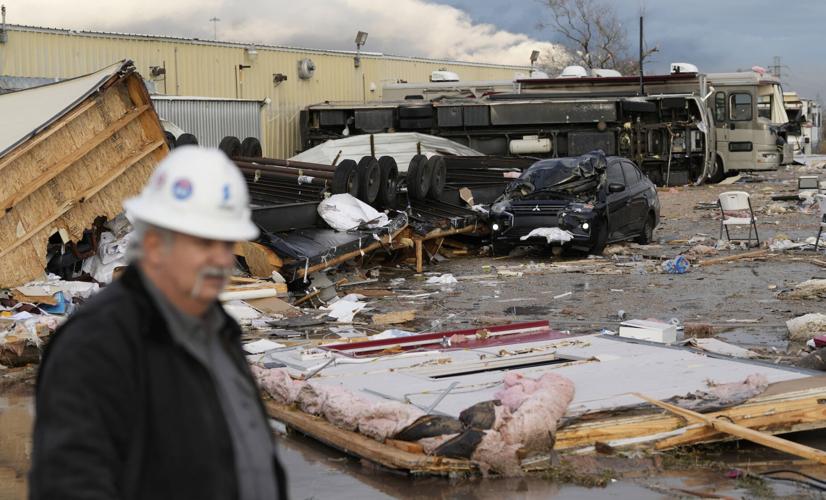 Johnny Graham walks past his storm-damaged office on Tuesday in Pasadena, Texas.

Mr. Electric employees Héctor Vázquéz, left, and Lucas Perry pass off a phone outside their office building where they were working when a powerful storm system hit Tuesday in Deer Park, Texas.

Johnny Graham walks past his storm-damaged office on Tuesday in Pasadena, Texas.

More than a dozen reported tornadoes struck across communities in Texas and Louisiana, damaging many homes and businesses as windows and roofs were blown off buildings -- and the threat is expected to persist Wednesday in other southern states.

A massive, multi-day storm is bringing different impacts to a large swath of the US this week, with parts of Alabama, Florida and Mississippi under a tornado watch through 5 a.m. Wednesday while snow is also in store for the Midwest.

"A winter storm will move into the Mid-Mississippi Valley by Wednesday morning. Areas of heavy snow and a wintry mix over Oklahoma and the Ozarks will expand northeastward into the Ohio Valley through early Wednesday," the National Weather Service said on Twitter.

On Tuesday, the storm inflicted extensive damage to the Houston-area communities of Deer Park and Pasadena, where downed trees and debris littered streets and thousands were without power after lines were knocked down.

Josh Bruegger, the city's police chief, described the damage as the worst he has seen in 25 years, adding, "For the coming days, we're going to have our hands full."

In Deer Park, people who were at St. Hyacinth Catholic Church hunkered down in a hallway and closed all doors as they heard what they believe to be a tornado roll through the area, Father Reginald Samuels said.

"It got really loud, we heard glass breaking, and the building was shaking then it was calm," Samuels told CNN, adding that no one was hurt.

Damage was also reported at a Deer Park nursing home, prompting the evacuation of about 60 residents Tuesday afternoon, Mayor Jerry Mouton told CNN. There were no reports of injuries, according to Jerry Dilliard with the Atascocita Fire Department. CNN reached out to the nursing home's operator Tuesday for more information.

As clean-up efforts are underway in Deer Park, schools in the city will close Wednesday, the district said.

"We hope this will give families a chance to recover from the stress of today's events, and we believe it is best for children to be with their parents or guardians after a natural disaster," the district said in a statement sent to parents and employees Tuesday night.

"It appears many homes and businesses in our area were damaged, and some neighborhoods remain without power at this time," the statement continued.

More than 100,000 homes and businesses in Texas and Arkansas were left in the dark early Wednesday morning, according to the tracking site PowerOutage.us. As of 9 p.m. ET, at least 14 tornadoes had been reported across southeastern Texas and southwestern Louisiana.

In Louisiana's Beauregard Parish, the sheriff's office reported significant damage to homes and other buildings, noting that roads were blocked and power lines were down. Nearly 16,000 homes and businesses were also without power in Louisiana early Wednesday morning.

Overall, there were no reports of serious injuries associated with Tuesday's storm damage, with Pasadena officials reporting one injury.